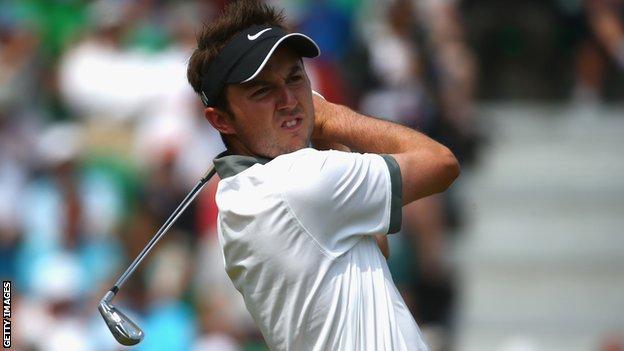 Shropshire amateur Ashley Chesters missed the cut by one shot but took huge satisfaction from an impressive Open debut at Royal Liverpool.

The 24-year-old followed his first-round 70 with a five-over 77 on Friday, ending three over for the tournament.

He told BBC Sport: "I'll take a lot from the back nine today, and yesterday to shoot 70 was great.

"Part of this week was about me wanting to look at where I am compared to the world's best players."

He added: "It was great to know that I can do it."

Chesters bogeyed six of his first eight holes but recovered from that bad start to put himself back into contention.

Birdies on the 15th and 17th brought him back to three over but he had to settle for a par on the last, which was not enough for him to return for the weekend.

English players who made the cut

Chesters continued: "I was pleased with the back nine because it could have all gone wrong, but I managed to stick in there and holed a couple of putts at the end.

"The noise when I holed the putt on 17 was crazy."

Lee Westwood, Ian Poulter and Oliver Fisher were also one shot shy of making the cut, while former world number one Luke Donald was one of six English players to secure their spot for the final two rounds.

He squeezed in at two under after registering a birdie at the last for his second successive 73.

Singleton, in the headlines for much of the build-up, finished in style with a two-under 70 after a 78 on Thursday.

English players who missed the cut

Southport's Baldwin, playing in his second Open, struggled to hide his frustration after a second-round 74 that ended his chances.

"I've had two days where I've not holed anything from more than six feet," he said. "It's frustrating from that point of view, but I've hit a few very poor shots.

"At the last yesterday, I hit it out of bounds from the middle of the fairway. It comes down to that, I'm afraid."

Tyrrell Hatton shot 77 to finish eight over, three-times Open champion Sir Nick Faldo ended nine over, while Chris Hanson and Matthew Southgate were 11 over and 12 over respectively.