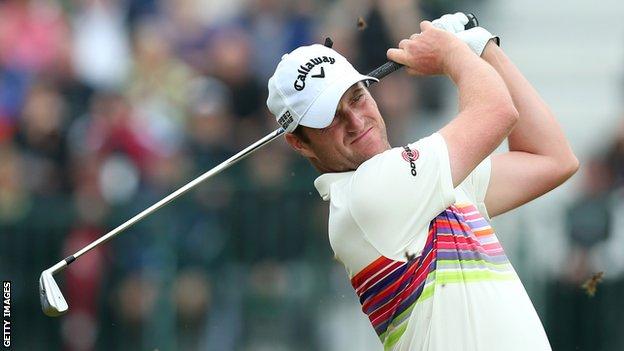 There was no Scottish charge up the Open leaderboard during Saturday's third round at Royal Liverpool.

Marc Warren carded a level par 72 to remain at five under for the tournament - 11 shots behind leader Rory McIlroy.

And the last remaining Scot in the field, James McLeary, finished with a double bogey on a damp, drizzly day to post 75 for a five over total.

For the first time in its history, the Open Championship employed a two-tee start because of the risk of afternoon thunderstorms.

Play started at 09:00 BST from both the first and 10th tee, with the field split into groups of three rather than the traditional two.

"Solid enough," said Gallacher of his third round of 70.

"I'm not driving the ball as good as I can, which is causing me a wee bit of a problem but there's a lot of good in there.

"It's not drastically bad, it's just a rough edges needing smoothed off, that's all.

"[My aim is] just to have as a many birdies as a I can and try and climb the board."