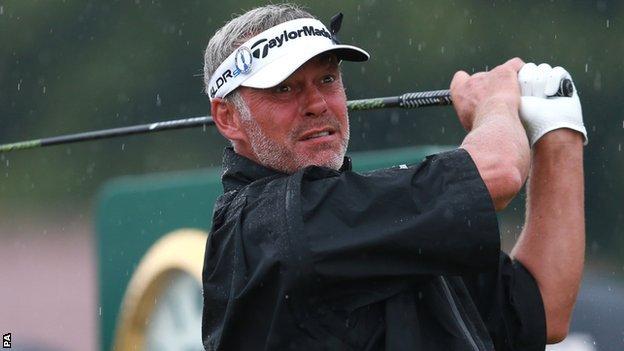 The use of a two-tee start for the first time in Open history was "a great decision," according to Rory McIlroy, leader by six shots after round three.

An amber weather warning meant players started at the first and 10th tees to finish before forecast thunder arrived.

But there was also criticism that key contenders, usually on course until evening, finished before rain set in.

"I was disappointed," said Graeme McDowell. "Getting out in front of the leaders can often be an advantage."

The R&A - golf's ruling authority outside the United States and Mexico - made the call to split the start based on a "significant risk" of thunderstorms later in the day.

Although the forecast electrical storms did not materialise, heavy rain fell within 30 minutes of the early conclusion to play at Royal Liverpool.

"They were good, easy conditions out there from the point of scoring."

The Open champion of 2011 Darren Clarke, who also trails McIlroy by 11 shots, said: "Obviously it's easy to say now that it was the wrong decision looking at the weather that we've had thus far but if they'd had a couple of bolts of lightning it would have messed everybody's day up.

"They've had to do what they had to do to try to get it done today and they're trying to do what's best for the tournament so there can be no blame apportioned at all to the R&A for that."

Sunday's final round will see a traditional one-tee operation in place, with play starting at 08:35 BST and weather conditions expected to be cloudy and dry.