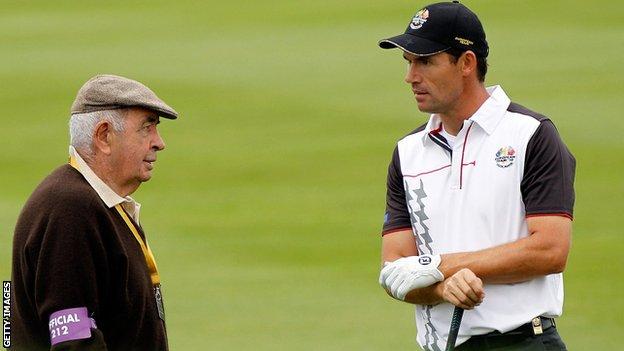 During their working relationship, Harrington won the 2007 and 2008 Open Championships as well as the 2008 USA PGA Championship.

"He was instrumental in those three wins," Harrington told BBC Scotland. "He was the man who got me there.

"He leaves a massive legacy in golf. He became like a father figure for me."

But Harrington insists the late Torrance did not only help those he coached.

"When he wasn't coaching one of his players, he was talking to the other players," said the Irishman.

"He was willing to give a lesson to just about anybody.

"I was always fascinated with how he would work on one player and nearly tell him the opposite of what I'd be doing and yet down the road, he'd be getting us to not swing the same but certainly do the same key things.

"As much as he was a great golf coach, and he was with a unique way of teaching, he was just a nice person to be around. He was very entertaining, very funny. Everybody enjoyed his company."

And, asked if he would have won his three majors without the help of Torrance, Harrington replied: "Absolutely not, not a chance in the world. It's as simple as that.

"At that time, he gave me what I needed. I started working with Bob in the late 1990s. He had worked with a lot of players, but particularly a lot of Irish players.

"All of his players were good ball strikers and went on to win tournaments. I certainly had a good short game at the time and I needed to up my game a bit in terms of striking and he was the man for me.

"Over those years I became very close to Bob. My own father passed away during that time.

"I had some great times with him.

"He had a great life. He really, really lived his life."