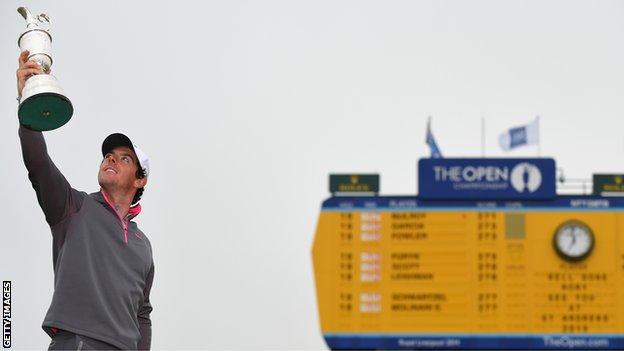 Rory McIlroy hopes to "dominate" golf and emulate the success of Jack Nicklaus and Tiger Woods after his Open Championship success.

A two-shot victory at Royal Liverpool added the Claret Jug to McIlroy's 2011 US Open and 2012 PGA Championship wins.

"I feel like there's a lot more left in me," said the 25-year-old, who is "confident" of completing a Grand Slam of majors at the Masters in April.

"I want be to be the guy that goes on and wins majors regularly."

Asked if he could replicate the 18 Grand Slam wins Nicklaus amassed and the success of 14-time major winner Woods, McIlroy replied: "I definitely hope so.

"Golf is looking for someone to put their hand up and try to dominate and I want to be that person."

The Northern Irishman's dominance at Hoylake in the third round saw him build a six-shot cushion before a final day where challengers Rickie Fowler and Sergio Garcia could never reduce the deficit to less than two strokes.

Two rounds of 66 and a 68 ahead of Sunday showed consistency which contrasted his Open form of 2013, where he missed the cut at Muirfield and described his play as "brain dead".

"I'm immensely proud of myself," added McIlroy, now world number two. "To sit here 25 years of age and win my third major championship and be three-quarters of the way to the career grand slam, I never dreamed of being at this point in my career so quickly."

Only Nicklaus and Woods had won as many of golf's cherished majors by the same age and scrutiny of McIlroy's Masters attempt in spring will now intensify as he bids to become the sixth player to achieve a Grand Slam.

Augusta National - the annual stage for golf's first major of each year - is widely regarded as the most welcoming course for McIlroy's style of play.

"I really don't have any doubt that he'll win there," said Fowler, 25. "It definitely fits his game."

McIlroy came tied eighth in the Masters this year but in 2011, in only his third Masters campaign, he lost a four-shot overnight lead on the final day as Charl Schwartzel claimed a first Green Jacket.

"I'm getting more comfortable," added McIlroy. "The thing is I've always been comfortable from tee to green at Augusta.

"And it's just taken me a few years to figure out the greens and figure out where you need to miss it and some different little shots that you might need that week.

"I'll be going into Augusta next year pretty confident."

His performance at Hoylake won praise from some of the world's top players.

Watson will captain the United States side that will bid to win back the Ryder Cup from Europe at Gleneagles, Scotland, in September.

Graeme McDowell, the 2010 US Open winner who may partner McIlroy there despite a legal wrangle between their management teams, said: "Happy with my week. Round one was a killer but it was tough to argue with @mcilroyrory. 3/4 of the Grandslam complete. #congrats #special"

And fellow Northern Irishman Darren Clarke, the 2011 Open winner, added: "Delighted for @McIlroyRory. Best player won this week and I think it may be only the 1st of many times his name is etched on the jug!"