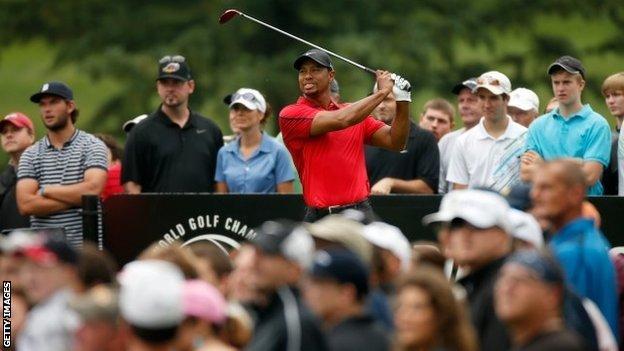 Tiger Woods was forced to withdraw from the WGC-Bridgestone Invitational in Ohio midway through his final round with a back injury.

Woods said the problem occurred playing his second shot from a difficult stance on the second hole, although he left the course on the ninth after his tee shot appeared to aggravate the injury.

The 38-year-old said: "I just jarred it and it has been spasming ever since."

The injury leaves his participation in the US PGA next week in doubt.

Woods is due to play alongside fellow American Phil Mickelson for the first two rounds at Valhalla next week.

As well as potentially missing out on the final major championship of the year, Woods may face a race to be fit in time for the Ryder Cup in September.

The 14-time major winner had surgery in March causing him to miss three months but Woods has reported no problems with his back since returning in June.

Two weeks ago, Woods finished level 69th at the Open, his worst showing in that event as a professional.

In Akron, the world number 10 played erratic shots on his front nine and was carted off the course on the ninth tee after showing considerable discomfort in his back.

At the time Woods withdrew, he was three over par for the final round at the Firestone Country Club - where he has won eight times before - and was four over for the tournament.