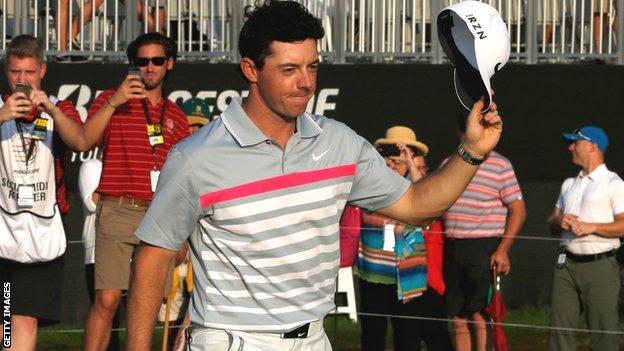 Rory McIlroy says his game is in better shape than ever going into this week's US PGA Championship at Valhalla.

The new world number one is seeking a hat-trick of wins with Sunday's victory in the Bridgestone Invitational coming a fortnight after his Open triumph.

McIlroy topped the European and US money lists with five wins in 2012 but he feels his game has improved.

"This is better. I'm more in control of my ball and my ball flight. Mentally, I'm really sharp," said McIlroy.

The 25-year-old Northern Irishman headed to Valhalla back on top of the world rankings for the first time since March 2013 after claiming his first World Golf Championship event at Firestone.

It is the third time the Open champion has taken top spot with a win, the first coming in the Honda Classic in March 2012 and the second later that year when he won the US PGA Championship by eight shots at Kiawah Island.

McIlroy started the final round in Akron three shots behind Spain's Sergio Garcia but led after three holes and won by two.

"It was the most comfortable I've ever felt trying to close out a golf tournament out there [on Sunday]," he added.

"I felt normal. I felt like it was the first round or the second round. It didn't feel like a fourth round.

"When I say mentally it's the best I've ever been, I didn't get ahead of myself. I didn't start to think about my score.