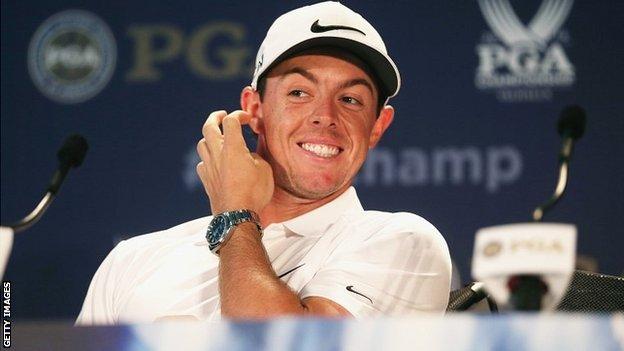 Former European Ryder Cup skipper Colin Montgomerie believes Rory McIlroy is "on his way to greatness" heading into the final major of the year.

McIlroy is the justifiable hot favourite for the US PGA Championship, which starts at Valhalla in Kentucky on Thursday. The 25-year-old is fresh from dominant victories at the Open and WGC Invitational in Akron, Ohio.

Those wins have taken McIlroy back to the top of the world rankings and Montgomerie echoes the view of most observers that the Northern Ireland star is the man to beat this week.

"When he plays well, he is the best player in the world," Montgomerie told BBC Sport. "We have a rightful number one in the world, with all respect to everyone else.

"When he plays his best, he wins. I could have said the same about Tiger Woods in the year 2000 when he was proving it. Now McIlroy is proving it as well."

Montgomerie is in the PGA field courtesy of his victory in the Seniors' PGA Championship earlier in the season, the first of two major wins on the veterans' circuit this year.

The Scot is convinced McIlroy can go on to make it three victories in a row following his triumphs at Hoylake and then Firestone last Sunday.

"Having played the course I can say it suits him down to the ground," Montgomerie added.

"This is like a Congressional [where McIlroy won the US Open in 2011], which suits Rory. There's bunkers out there at 300 yards he doesn't see. I see them as sight bunkers to lay up on - it's a whole different ball game."

Although Montgomerie never tasted victory in a major, he knows all about collecting wins with more than 30 to his name in a glittering European Tour career. The 51-year-old has been impressed with the maturity McIlroy is now showing.

"He's taken a few years to learn how to react and how to cope with stardom. It's not easy, living one's life in the public eye. He's managed it very well, especially over the last month.

"I expect he is going to go on and win here as well and make that four majors now. He's on his way to greatness."

Montgomerie is thrilled to be back on golf's big stage having not played one of the big four tournaments since missing the cut at the 2010 PGA. He believes his impressive displays on the Champions Tour can act as a springboard for personal success this week.

"It's great to be back in this fold and to see everybody again," he said.

But does he think the standard of golf he's produced this summer is good enough to contend this week? "I hate to say it, but I think it is," he claimed.

"That's the issue. The rest is OK. I can hit the fairways and I can get up and down but it's the length of the second shots into the greens that is going to be an issue here.

"But at the same time I'm ready for the competition. This is, though, a whole different ball game when you're playing against Rory McIlroy and friends, who hit the ball out of sight."

McIlroy is at the vanguard of a new generation that is taking over the game. All three major winners this year are repeat champions after Bubba Watson added a second Masters Green Jacket and 2010 PGA winner Martin Kaymer ran away with the US Open at Pinehurst.

His most likely challengers at Valhalla are 2013 Masters winner Adam Scott, whom he deposed as world number one, and last year's US Open champion Justin Rose.

Rickie Fowler, fifth at the Masters and joint runner-up at both Pinehurst and Hoylake, has been the most consistent major performer this year. The young American should not be discounted.

And Sergio Garcia's growing maturity suggests he will rebound from his near misses at the Open and Akron, where he was twice second to McIlroy, rather than fade from the limelight as he has done in the past.

Rarely in recent years have we had so many of the same generation in such enticing form heading into a major. It suggests a special week in Kentucky.

It already is for Monty, as he relishes the prospect of another crack at golf at the highest level.