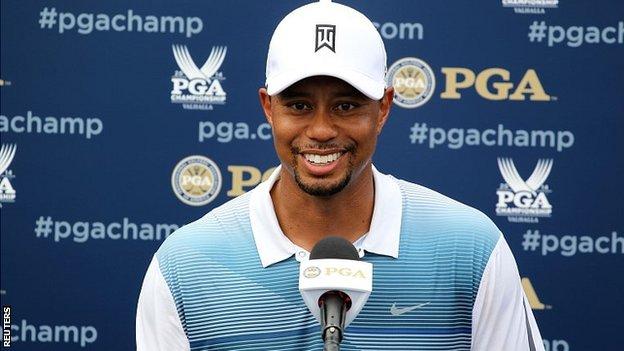 Tiger Woods will start the US PGA on Thursday after recovering from the back injury that forced him to withdraw from Sunday's final round at Firestone.

The American, 38, was a serious doubt for the year's final major but he practised at Valhalla on Wednesday and said he was "pain free".

The 14-time major champion had surgery on a pinched nerve in his back in March and missed the Masters and US Open.

"I knew it was not the site of the surgery. This is different," he said.

Woods said the sacrum bone in his back was dislodged when he played his second shot on the second hole on Sunday, but that his physio had "popped the bone back in".

"My physio is here so if it goes out he is able to fix it," said Woods, who arrived at Valhalla on Wednesday and played the front nine alongside Steve Stricker, Davis Love and Harris English before speaking to reporters.

"I still need to build up strength and it's going to take more time. The treatment has been fantastic, once the bone was put back in the spasms went away and from there I started to get some range of motion."

Woods beat Bob May in a play-off to win the US PGA the last time it was held at Valhalla in 2000, but missed the Ryder Cup when it was held at the Kentucky venue in 2008.

The course has since undergone extensive renovation led by designer Jack Nicklaus, but Woods's caddie Joe LaCava has been scouting the layout.

"I had my (yardage) book from 2000 but it's useless. Joey has been here and got a pretty good handle on it," added Woods, who opted to just chip and putt on the back nine. "I feel pretty good about how I played. I need to get more of a feel how this course is playing.

"I'm going to try and go out and win this event - that's all I'm focusing on."

Woods has not won a major in six years and returned from surgery at the Quicken Loans National in June, but missed the cut before finishing 69th at the Open earlier this month.

His participation at Valhalla is good news for US Ryder Cup captain Tom Watson, who admitted Sunday's withdrawal "did not bode well" for his selection for the team to take on Europe at Gleneagles in September.

The former world number one cannot qualify automatically and Watson has previously said he would pick him if he was healthy and playing well.

"I am encouraged," said Watson. "Obviously he's not in great health and he hasn't played very well. So the question is, will I pick him? Well, I can't tell until things happen in the next three or four weeks.

Woods is due to play alongside fellow American Phil Mickelson and Ireland's Padraig Harrington for the first two rounds, starting from the 10th tee at 13:35 BST on Thursday.