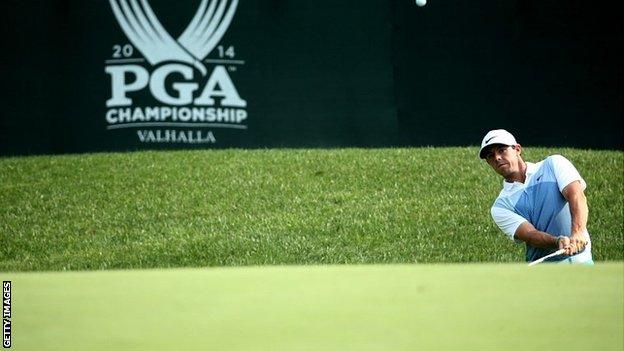 Rory McIlroy will start as clear favourite when the US PGA Championship gets under way at Valhalla on Thursday.

McIlroy, 25, is back as world number one after wins at the Open and last week's WGC event and is bidding for his fourth major title.

Tiger Woods has declared himself fit despite withdrawing from the WGC with a recurrence of a back problem.

The Northern Irishman, who is aiming to become the first man to win back-to-back majors since Padraig Harrington in 2008, says his confidence in his game is at an all-time high.

"Definitely over the past couple of weeks, it's the best I've driven the ball. I'm converting a lot of the chances that I'm giving myself," said McIlroy, who won the US Open in 2011 and the US PGA in 2012 and is only the third player after Jack Nicklaus and Woods to win three majors by the age of 25.

Woods, who won the last of his 14 major titles in 2008, was a serious doubt for the US PGA after pulling out in Sunday's final round at Firestone when his problematic back flared up again.

But the 38-year-old, who had surgery for a pinched nerve in March and missed the Masters and US Open, played a practice round at Valhalla on Wednesday afternoon and will start the year's final major, traditionally known as "glory's last shot".

Woods, who beat Bob May in a play-off the last time the US PGA was held at the course in 2000, is due to tee off with Mickelson and Harrington at 13:35 BST on Thursday.

The resurgent Garcia, ranked third in the world, has come second in his last three tournaments, including behind McIlroy in the Open and WGC, and is in a positive frame of mind as he chases a first major title.

"Obviously finishing second is not the greatest, but I'm really excited about the way I'm playing," said the 34-year-old Spaniard, who has finished runner-up in four majors.

"I've always wanted to win at least one (major), but I would never say I felt urgency about it. If I get to 45 and I haven't won one, then I'll probably start worrying a bit more. But hopefully that won't happen."

Fowler is another of the season's in-form players after a strong record in the majors that has seen him finish fifth at the Masters and second at the US Open and the Open Championship.

The 25-year-old, whose rise has coincided with his switch to Woods' former coach Butch Harmon at the end of last year, said: "This year has definitely been the most comfortable I've felt in the majors.

"But I think the more I can put myself in contention on Sunday, and possibly in the final group, I'll just get more and more comfortable."

Fowler is virtually assured of a place on the US Ryder Cup team, but with the qualification period ending after the PGA concludes on Sunday, Phil Mickelson still has work to do.

The five-time major winner, who has appeared in the last nine Ryder Cups, lies 10th in the points standings, with only the top nine qualifying automatically.

Woods cannot qualify directly, but is seeking to convince captain Tom Watson that he merits one of the three wild-card picks on 2 September.

Europe's potential Ryder Cup team have until the end of August to secure qualification but Cup stalwarts Lee Westwood, Luke Donald and Ian Poulter are outside the automatic places and will need to show some form over the next few weeks.