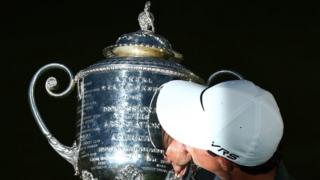 Rory McIlroy told BBC Sport Northern Ireland last December that he would target two major wins in 2014 to make up for missing out in 2013.

McIlroy completed his second major win of the season on Sunday night when he edged out Phil Mickelson to win the US PGA Championship three weeks after his Open triumph at Royal Liverpool.