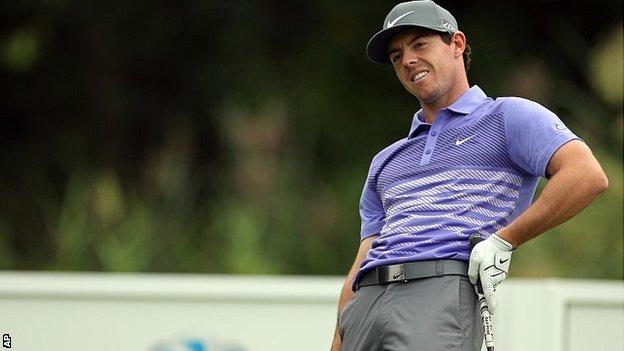 Rory McIlroy fought back from a rusty start with a second-round 65 to ease into contention in the first of the four PGA Tour play-off events.

The world number one surged to three under to trail Adam Scott and Cameron Tringale by five shots in New Jersey.

McIlroy, who opened with a 74 in The Barclays event in the aftermath of his US PGA win, hit six birdies to reignite his bid for a fourth straight win.

The pair are outside the top-nine automatic qualifying spots and are likely to have to rely on a captain's wildcard to make the side for September's clash against the USA at Gleneagles.

Eight-time Cup veteran Lee Westwood is another in danger of missing out but rounds of 70 and 73 meant he made the weekend at one over.

Also one over was five-time major champion Phil Mickelson, the US PGA runner-up, whose 72 included a shot hit out of a hospitality dining area.

McIlroy, 25, took some time out to enjoy the fruits of his fourth major win earlier this month but said a range session after Thursday's opening round ironed out his swing.

"The work I did on the range really helped, got back in the rhythm and the flow of things," said McIlroy, who also won the Open in July followed by the WGC-Bridgestone Invitational. "I knew my game was there. I just needed to think more about the chances I was giving myself."

Automatic selection for the USA is settled with captain Tom Watson making his three wildcard picks on 3 September.

The Ryder Cup takes place at Gleneagles, Scotland, from 26-28 September.