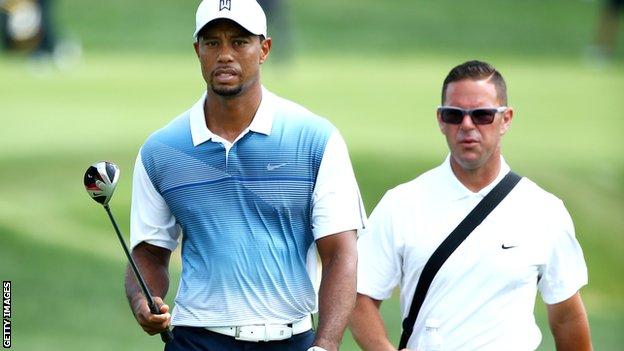 Tiger Woods has said he will no longer be working with coach Sean Foley.

The former world number one, currently sidelined with a back injury, spent four years with Foley but has not added to his 14 major titles in that period.

Woods, 38, returned to the top of the rankings in 2013 but has been deposed after a best finish of 25th this year.

"I'd like to thank Sean for help as my coach and for his friendship. This is the right time to end our professional relationship," Woods told his website.

"Sean is one of the outstanding coaches in golf today, and I know he will continue to be successful with the players working with him.

"Presently, I do not have a coach, and there is no timetable for hiring one."

After being named the PGA Player of the Year in 2013 - when he won five of his 16 tournaments and finished in the top 10 in three others - Woods has endured a wretched 2014 season.

He missed the first two majors of the year, the Masters and US Open, while recovering from back surgery on 31 March.

At the Open at Hoylake, Woods finished in 69th place, 23 shots behind champion Rory McIlroy.

He then missed the cut at the PGA Championship this month, a week after withdrawing from the World Golf Championships event in Akron with further back trouble.

Having failed to earn an automatic place in the US team for next month's Ryder Cup at Gleaneagles, Woods ruled himself out of contention for a wildcard and said he would not return to competition before December.

Foley, who has also coached Justin Rose, Lee Westwood and Hunter Mahan, was Woods' third coach since turning professional in 1996.

The American split from Butch Harmon in 2003 and spent six years with Hank Haney, which ended when Haney resigned in the spring of 2010.

Woods began working with Foley at the 2010 PGA Championship.