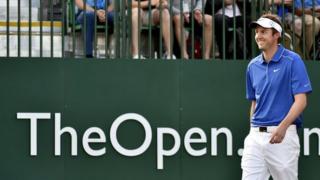 Chesters weighs up his prospects

Hawkstone Park's Ashley Chesters talks to BBC Radio Shropshire about his decision over whether to turn professional.

Chesters, from the club that also produced two-time major winner Sandy Lyle, has qualified for The Open Championship for the second year running, a rare achievement for any amateur.

But, if he opts to turn pro, then he would pass up his chance to play at St Andrews, where next year's Open will be held - over the famous Old Course.