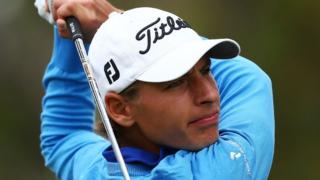 Swede Joakim Lagergren fires a course record 62 to take the lead on day one of the Northern Ireland Open at Galgorm Castle.

After starting his round at the 10th, Lagergren, 32 posted five birdies on his opening nine before carding four more in a blemish-free card.

Leader Lagergren said improved putting had been the key to his brilliant opening round at the Ballymena venue.

"I have been playing really good the last couple of weeks but the putting hasn't been going so well. Today I holed a few putts which gave me the momentum," the Swede told BBC Sport.