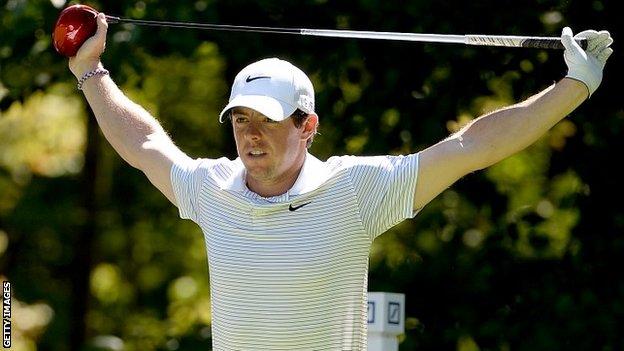 Rory McIlroy has his sights set on knocking Hunter Mahan from the top of the FedEx Cup standings at this week's Deutsche Bank Championship in Boston.

The world number one is targeting a fourth win in five events to regain his lead in the PGA Tour play-offs.

"My golf game feels probably a little more in control now than it did back then," said the 25-year-old.

"Certain shots that I'm able to hit now that I maybe wasn't able to hit back then. And I'm definitely driving the ball as good as I ever have, if not better."

In 2012, McIlroy won the Boston event during a hot streak that yielded a second major - the US PGA - and led to player of the year honours.

This season the Northern Irishman won at Wentworth in May before triumphing in the Open, the WGC Bridgestone Invitational and the US PGA in consecutive weeks.

"My frame of mind and where I am mentally is very similar," said McIlroy, who had lunch with former US president Bill Clinton in Sag Harbor, New York on Tuesday.

"I am very relaxed, I'm going out on to the golf course and I'm not really putting a whole lot of pressure on myself.

"I'm just going out and playing and I know that if I play well, that I'll have somewhat of a chance to maybe win the tournament.

"I am excited for the opportunity to get back to that number one place and move on to Denver with a little bit of a lead."

This week's Deutsche Bank event finishes on Monday, meaning it does not count towards Ryder Cup qualification for European players, for whom the deadline is Sunday.

Englishmen Ian Poulter and Luke Donald are outside the top-nine automatic qualification positions and will therefore be trying to impress captain Paul McGinley for a wildcard in Boston.

Countryman Lee Westwood must also rely on a wildcard but is not playing this week after failing to qualify, while Northern Ireland's Graeme McDowell, who occupies the final automatic spot, is also absent after the birth of his first child.

The top 70 players on the FedExCup points list after the Deutsche Bank Championship advance to next week's BMW Championship in Colorado where the leading 30 will qualify for the 11-14 September Tour Championship finale in Atlanta.