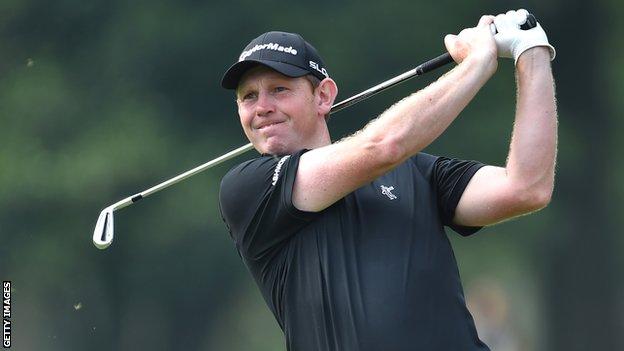 Former European captain Bernard Gallacher believes his nephew Stephen should be one of the three Ryder Cup wildcards at Gleneagles this month.

Captain Paul McGinley will announce his three picks at 12:30 BST on Tuesday.

"I'd pick Stephen," Gallacher told BBC 5 live. "His current form is terrific, he's Scottish, which will go down well, and he's played well on that course."

The European selection is thought to be between five players, including Gallacher, 40, who needed to finish second at last week's final qualifying event, the Italian Open, and was one shot adrift in third place.

Gallacher retained his Dubai Desert Classic title in February and though he missed the cut at the US Open and PGA Championship, he was 15th in The Open Championship and tied sixth at the WGC Cadillac Championship.

Ryder Cup stalwarts Lee Westwood, Ian Poulter and Luke Donald are all vying for a captain's pick, having failed to qualify automatically.

"The one at risk I think is Luke Donald," Gallacher said.

Former world number one Donald, 38, is now ranked 29th and has a best finish this year of second at The Heritage in April, but has missed four cuts, including the Masters and the US Open.

Bernard, who captained Europe in 1991, 1993 and 1995, losing the first two but winning the third, says Francesco Molinari, 31, the world number 44, who was part of the winning team in the last two Ryder Cups, should not be selected.

"He's well down the list, well behind Stephen," he said. "His Ryder Cup record isn't really impressive. Good player, very solid but I don't think he's in the running.

"This is one of the most difficult jobs for a captain picking the wildcards, I've never really been in favour of them when the world lists and European points list are so definite."

Poulter, 38, the world number 35, was instrumental in Europe's record comeback victory at Medinah two years ago, winning four points out of four in the competition but has a highest of second on the PGA Tour this year, missing the cut at The Open Championship.

"Ian Poulter is going to be difficult not to pick because he played so well at Medinah. What's going against him is his present form, but he does seem to raise his game at the Ryder Cup and he can act as an inspirational player."

Former world number one Westwood, 41, currently ranked 37th, has played in the last eight Ryder Cups but has had a mixed 2014 in the majors, missing the cut at the US Open and The Open Championship, and finishing seventh and joint 15th at the Masters and PGA Championship respectively.

"Lee Westwood was asked by McGinley to show some form," Gallacher said. "He had a really low score in the final round at Firestone (of 63 in last month's Bridgestone WGC event to earn a share of 19th), finished pretty high up at the US PGA when he tied 15th so he may have done enough to show he's playing ok.

"The captain has got to look at foursomes and fourball pairings, so there will be other things going through his mind, like experience.

"So it's experience against somebody bang on form."