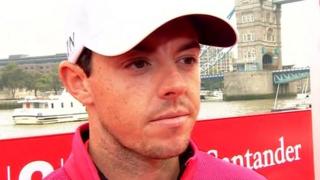 Ryder Cup will be close - McIlroy

Rory McIlroy anticipates a close battle when Europe take on the United States in the Ryder Cup at Gleneagles this month.

However, he says the absence from the USA team of in-form players such as Billy Horschel could work in Europe's favour.

World number one McIlroy, playing in his third Ryder Cup, says he would like to team up with fellow Northern Irishman Graeme McDowell again from 26-28 September.