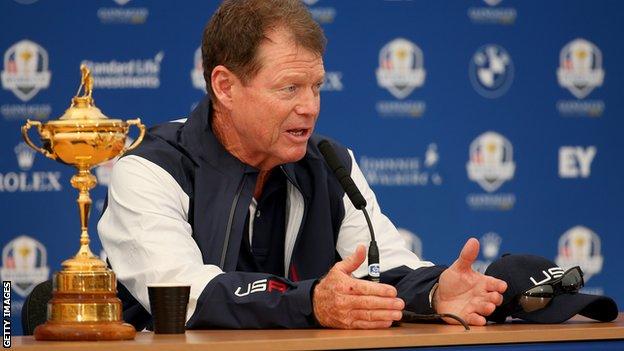 US Ryder Cup captain Tom Watson says his team will be targeting Europe's best player and talisman as they seek to overturn golfing logic and recent history this week.

The US have not won on European soil for 21 years, while the home team count in their ranks the world's top-ranked player in Rory McIlroy and three of this year's four major champions.

But Watson, returning to the country where he won four of his five Open championships, believes his unheralded team can bring down both McIlroy and Europe's great inspiration two years ago, Ian Poulter.

Watson, 65, said: "When you beat the stud on the other side, it gives a boost to your team.

"The bottom line is that if each of your players wins more than they lose, we win as a team. That is what I have told our team.

"Poulter, he's an 80% victor over the matches he has played in. We would like to reduce that."

Watson, the oldest captain in the contest's 87-year history, wants revenge for the shock defeat at Medinah in 2012, when they led 10-6 going into the final day's singles only to lose eight and draw one of the 12 matches as a Poulter-led Europe pulled off one of the great Ryder Cup comebacks.

Only seven of that American dozen have made it to Gleneagles, but Watson - captain when the US won at the Belfry in 1993 - said: "I have made it very clear to them that this trip is a redemption trip.

"Those players that played on that team… it's time to make amends and try to redeem yourselves from what happened in 2012. I think it's a motivation rather than a negative.

In addition to McIlroy, winner of both the Open and US PGA this summer, Europe's team contains three more of the world's top six ranked players and US Open champion Martin Kaymer.

Only once since 2002 - at Valhalla six years ago - have they lost the Ryder Cup.

"But we have been favourites before in Ryder Cups. I think our players have deserved it, and I think it's a situation to embrace."

McGinley, 47, said his side should not be "afraid" or "ashamed" of being favourites - and warned they face a "very tough contest".

He added: "The guys have worked very hard to be in the position they are.

"Having said that, I did a bit of calculation myself when the two teams were formulated, and Tom's team's average ranking position was 16 and ours was 18. So this is not a weak American team.

"We might be slight favourites with the bookies, but the two teams are very well balanced and very close together."

Both teams arrived in Perthshire on Monday, with McIlroy one of the first on the driving range set up alongside the substantially redesigned Centenary course.

McGinley insisted there were no problems between the 25-year-old and his fellow Northern Irishman Graeme McDowell.

McDowell, 35, admitted in his BBC Sport column that the lawsuit McIlroy has filed against his management company had put a strain on their relationship, but stressed he would love to be paired with his compatriot again.

Yet McGinley may have other plans ahead of Friday morning's fourballs.

He said: "Both of them have assured me all along that there's no issues, and that's the way I've always seen it. Whether they come together or not is another story.

"But if I don't decide to play them, it would be for tactical reasons. It won't be for any other reasons.

"They have played six Ryder Cup matches and they have only won two together. It's not like these guys are written in stone."