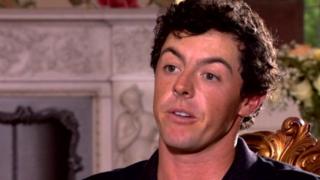 Rory McIlroy says "golf is my girlfriend" as he ruled out becoming involved in a relationship for the foreseeable future, four months after his break-up with Caroline Wozniacki.

McIlroy split from the tennis star in May, just days after invites for the couple's planned wedding were sent out, and the 25-year-old has since gone on to land back-to-back major titles.

"Golf is my girlfriend at the minute and it's going to be that way for a while," said McIlroy.