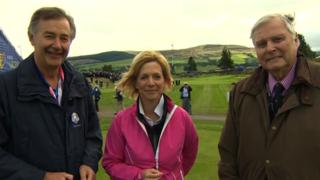 Hazel Irvine looks ahead to the 2014 Ryder Cup at Gleneagles with the help of BBC golf experts and former players, Ken Brown and Peter Alliss.

The trio discuss the chances for the European Team to secure victory on home soil - to make it three wins in a row and eight successful tournaments in the last ten.

They examine this turn around in dominance in recent years, with the American team claiming they are looking for "redemption" after their crushing defeat in Medinah in 2012.

Watch coverage of the Ryder Cup on the BBC on TV, radio and online