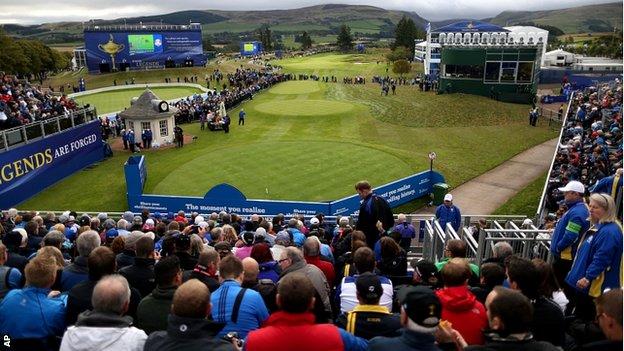 Europe will start as favourites to extend a remarkable winning streak against the United States when the 2014 Ryder Cup gets under way at Gleneagles in Scotland on Friday.

The European side have won seven of the last nine matchplay contests following a spectacular comeback at Medinah two years ago, while the USA are chasing a first away win since 1993.

Captain Paul McGinley's team contains world number one Rory McIlroy and the hero of that fightback in Chicago, Ian Poulter.

The USA, captained by golf icon Tom Watson, are without Tiger Woods and a number of other top stars but, with an average world ranking of 16 compared to Europe's 19, will present a formidable challenge in the biennial event.

"Just as Scotland is the heart and soul of the game of golf, so the Ryder Cup is the pinnacle of team play in the sport," said 65-year-old Watson, an eight-time major champion and the captain of the victorious US team in 1993.

"You might say the next 72 hours are a date with destiny for the 24 players. In many ways, this is their own crowning moment."

Two years ago, Europe were staring at a heavy deficit going into the final 12 singles matches before Poulter, playing alongside McIlroy, birdied the last five holes of his Saturday fourball round for victory.

The Englishman's charge gave Europe "a pulse", as he put it, but they still trailed 10-6 before winning eight singles matches to retain the trophy on a thrilling final day.

Watson has spoken this week of how his team are seeking "redemption" for Medinah, and said they will be looking to "target" Europe's talisman.

Poulter has struggled for form this season and needed a captain's wildcard pick to make the side, but, as Europe's leading points scorer in the last three Ryder Cups and with a win ratio of 80%, he is likely once again to prove a thorn in the US side.

Northern Irishman McIlroy has surged back to the top of the world rankings after a spectacular summer in which he won the Open and US PGA to take his tally to four majors.

"They can try and target us all they want, but there's guys alongside us that can do just as good a job," said McIlroy, 25, who was delighted to hear the inspirational words from former Manchester United boss Sir Alex Ferguson at Gleneagles earlier this week.

"We may come from diverse and different cultural backgrounds but together we stand as one," said McGinley in his opening ceremony speech.

For the US, former world number one and 14-time major champion Woods is out with a back injury, while the big-hitting Dustin Johnson is on a break from the game and former US PGA champion Jason Dufner is also injured.

But in 44-year-old Phil Mickelson, who becomes the first American to play in 10 Ryder Cups, two-time Masters champion Bubba Watson and exciting youngsters such as Keegan Bradley and Rickie Fowler, the visitors are expected to mount a serious challenge.

"The US team have talked up their underdog status but I don't think that's the case," said Westwood, 41. "They will be very hard to beat."

The event begins at 07:35 BST on Friday with four fourball matches, in which two players from each side hit their own ball and count the best score on each hole.

Rose and Stenson will take on Bubba Watson and Simpson in the first match, Bjorn and Kaymer will play Fowler and 35-year-old US rookie Jimmy Walker in match two, Gallacher and Poulter will meet the other two US debutants, Jordan Spieth and Patrick Reed, in the third match and McIlroy will join Garcia against Mickelson and Bradley in the final group.

Friday's afternoon session will be four foursomes matches in which the teams use one ball each and hit alternate shots.

Saturday sees a repeat of fourballs and foursomes before all 12 players on each team compete in head-to-head singles matches on Sunday. The winners will be the first team to 14.5 points, although Europe will retain the Cup if they reach 14.

Up to 250,000 fans are expected to attend the event in Perthshire this week, with 544m households across 815 territories expected to watch on TV.

"I know you will be energetic, passionate and loud, but I also know you will also be gracious, considerate and courteous to our opponents. It is this which makes the Ryder Cup unique," added McGinley at the opening ceremony.

The Gleneagles PGA Centenary course was designed by 18-time major champion Jack Nicklaus in 1993 but amended by the golfing legend three years ago to host the Ryder Cup in Scotland for only the second time in the competition's 87-year history.

The weather forecast is for early showers and strong winds on Friday, continuing stiff breeze on Saturday with patchy sun and isolated showers and lighter airs on Sunday.