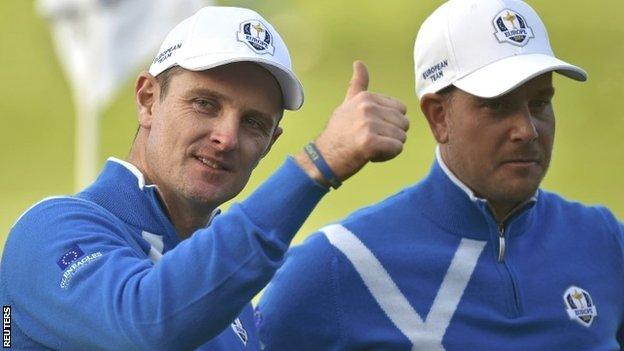 Justin Rose and Henrik Stenson will lead off again as Europe seek to stretch their 5-3 lead on the second day of the Ryder Cup at Gleneagles.

Rory McIlroy will play with Ian Poulter against Jimmy Walker and Rickie Fowler.

The US won the opening foursomes session 2½-1½ but Europe surged back to clinch the fourballs 3½-½ to take the overnight advantage.

And European captain Paul McGinley was delighted with his side's foursomes performance.

"It was terrific, a great response," said the Irishman. "As we have all seen in Ryder Cups over the years, momentum can be a huge and key factor.

"The way the Americans played the last few holes was very strong and they certainly had their tails up going into the afternoon sessions.

"That can often have a ripple effect and a domino effect so for our guys to react the way they did, for all four matches to be up after six holes, was a terrific response.

"It shows a huge amount of character that we have, huge amount of talent that we can come out with such strong pairings in the afternoon and a great response and resilience from the team."

McGinley also explained his decision to pair McIlroy with Poulter on Saturday, after the latter suffered his biggest loss in the Ryder Cup when he and Stephen Gallacher were beaten 5&4 by rookie pair Jordan Spieth and Patrick Reed.

"I put him back with Rory because he played the senior figure today with Stevie Gallacher and obviously it didn't go well," McGinley added. "And Ian Poulter's heart is that big, as we all know and that was a real body blow for him to lose a match heavily in a Ryder Cup.

"I just want to bring Ian Poulter back up again and put him on the shoulder of the world's best player, and I know he'll respond to that."

US captain Tom Watson said of his side: "They are disappointed they didn't get it done, but they've been disappointed before.

Watson surprised many by leaving out Spieth and Reed from Friday's foursomes session after the US rookies trounced Poulter and Gallacher.

"I know the question is going to be asked about Jordan Spieth and Patrick Reed, whether I should have played them in the afternoon, and I thought at the time it was the best decision not to play them," he said.

"There were a variety of reasons, but I won't go into those. It was a decision that my vice-captains and I made."

The American skipper has left out veteran Phil Mickelson, playing in his 10th Ryder Cup, and partner Keegan Bradley after the pair enjoyed a narrow win against McIlroy and Garcia but lost heavily to Victor Dubuisson and Graeme McDowell.

"They are tired," said Watson. "Give them a break in the morning, get their legs back, and there's a good chance they'll go in the afternoon in some way, shape or form."