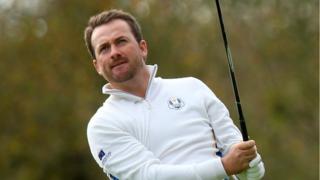 Graeme McDowell expresses his delight after he and playing partner Victor Dubuisson complete a 5&4 foursomes win over American pair Rickie Fowler and Jimmy Walker on the second day of play at the Ryder Cup.

McDowell is fulsome in his praise of Frenchman Dubuisson, who he describes as "a superstar in the making", reserving particular acclaim for his iron play.

The Northern Ireland golfer admits the duo were disappointed not to play in Saturday morning's fourballs but added that European captain Paul McGinley "had his reasons" for the decision.