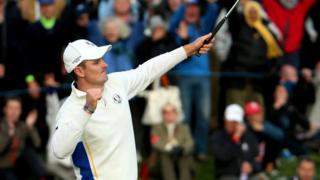 BBC Sport takes a look at the story of day two of the Ryder Cup 2014 in three minutes.

Europe extended their lead over the United States to 10-6 after winning the afternoon foursomes 3½-½.

While Europe will be huge favourites to retain the trophy heading into Sunday's singles, the US led by the same margin after two days at Medinah in 2012 only to lose the match.