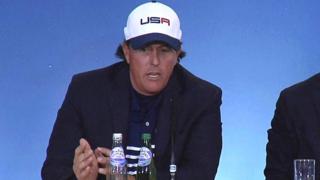 Mickelson critical of US captain

Phil Mickelson appears to question the methods of US captain Tom Watson after Europe retained the Ryder Cup at Gleneagles.

The five-time major winner praises his 2008 captain Paul Azinger, the last captain to guide the US to victory, saying he got players "invested in each other's play".

Mickelson, who was making a record 10th Ryder Cup appearance at Gleneagles, was said to be unhappy at being left out by Watson on Saturday.