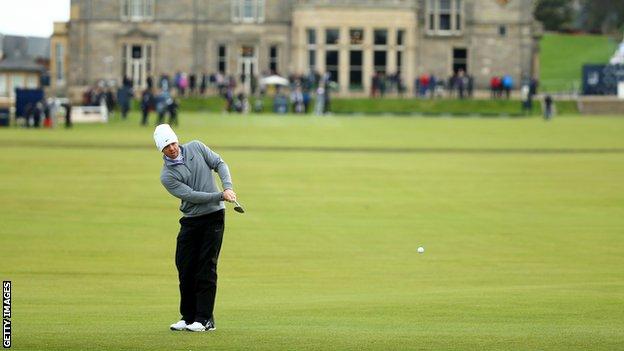 Rory McIlroy had to settle for joint second at the Alfred Dunhill Links Championship after finishing a shot behind winner Oliver Wilson.

The world number one from Northern Ireland, chasing a fifth win of the season, fired a four-under-par 68 at St Andrews to end on 16 under.

McIlroy was tied for the lead but bogeyed the 17th after rolling his putt from off the green into a pot bunker.

Belfast's Michael Hoey had a 73 to leave him on eight under.

Shane Lowry (67) finished 14 under with Padraig Harrington (71) 10 under and winning Ryder Cup captain Paul McGinley (70) back on seven under.

McIlroy got off to the worst possible start when he double bogeyed the opening hole after missing the green.

The Holywood player bounced back with four straight birdies to claw himself back into contention.

Playing alongside his father Gerry, who was celebrating his 55th birthday and playing the pro-am with his son, McIlroy birdied the 18th to get within one but came up just short.

"If I look back, I probably lost it on those two holes, the first and the 17th but it was fantastic to play with my dad and for him to play St Andrews on his birthday was very special," said McIlroy.

Englishman Wilson, who played in the 2008 Ryder Cup, held on to secure his first European Tour tile.