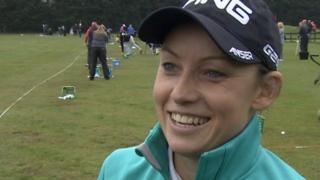 Olympic bronze medallist Chloe Rogers tells BBC Look East that she is spending her retirement from international hockey trying to earn a full-time career in golf.

The 29-year-old from Harlow played 162 times for England and Great Britain, in a senior career spanning nine years, before calling it a day in July.

Rogers took to the fairways of Stoke-by-Nayland for the Ladies European Tour Access Series, where the likes of actress and presenter Denise van Outen also featured in the Pro-Am event on Wednesday.