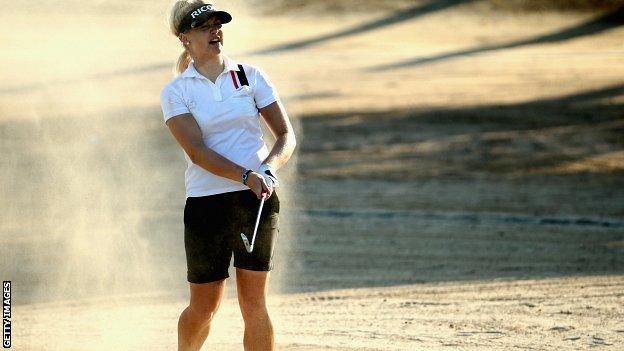 England's Charley Hull will head into the final round of the season-ending Dubai Ladies Masters seven shots off the lead but on track to win the European Order of Merit.

Melissa Reid of England surged into second place with a 65 that included seven birdies and no bogeys.

Hull leads France's Gwlayds Nocera by £18,000 in the Order of Merit.

Nocera will begin the final day three behind Hull on seven under after two birdies in the final three holes helped her to a 71.

Hull had been keeping in touch with leader Feng until a bogey on the 11th was followed by a triple bogey on the 12th, but three birdies in the closing holes got the English player back on track.

"I got off to a fast start and I was three under through 10 holes, and just lost a little bit of concentration for two holes.

"I fought back after making a triple and a bogey with three birdies after that, so I'm really proud of myself for doing that."

Cheyenne Woods, the niece of 14-time major winner Tiger Woods, lost ground with a 72 that kept her at five under par.