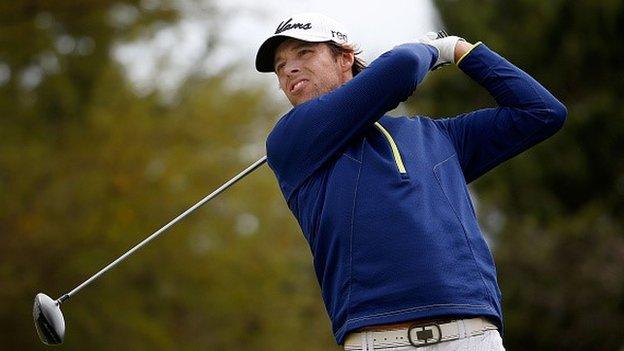 Australia's Aaron Baddeley holed a 336-yard tee shot but only signed for an extraordinary birdie at the Texas Open.

Baddeley, 34, hit his first tee shot on the par-four 17th into woodland and after declaring his ball unplayable went back to the tee to play again.

After holing what was his third shot, he said: "I hit it, started walking and then heard the crowd going nuts."

Baddeley is on four under, a shot behind leader Charley Hoffman after the American hit a five-under 67.

Hoffman, who avoided the windy conditions by playing in the afternoon, had birdies on the second, third, ninth, 11th and 17th in a bogey-free first round.

But the shot of the day was undoubtedly Baddeley's and he followed it with a chip-in birdie on the 18th to cap a sensational end to an otherwise average round.

Three-times Masters winner Phil Mickelson is two under in the penultimate event before the first major of the season starts at Augusta on 9 April.

But he was hampered when his club head came off after hitting an approach from the bunker on the 12th.

Meanwhile, Northern Ireland's 2010 US Open champion Graeme McDowell pulled out of the Texas Open with a leg injury.