World number one Rory McIlroy has described his final-round collapse at the 2011 Masters as the "most important day of his career".

The 25-year-old Northern Irishman led by four shots going into the last day at Augusta but dropped six in three holes and ended up carding an 80.

"I learned so much about myself and what I needed to do the next time I got into that position," he said.

McIlroy would complete a career grand slam with a green jacket on 12 April.

He goes into the first major of the year as favourite and would become the first Irishman to triumph at Augusta.

And he believes that experience four years ago makes him better equipped to handle the pressure.

"If I had not had the whole unravelling, if I had just made a couple of bogeys coming down the stretch and lost by one, I would not have learned as much," added McIlroy in an interview with BBC Sport.

"Luckily, it did not take me long to get into a position like that again when I was leading a major and I was able to get over the line quite comfortably.

"It was a huge learning curve for me and I needed it, and thankfully I have been able to move on to bigger and better things.

"Looking back on what happened in 2011, it doesn't seem as bad when you have four majors on your mantelpiece." 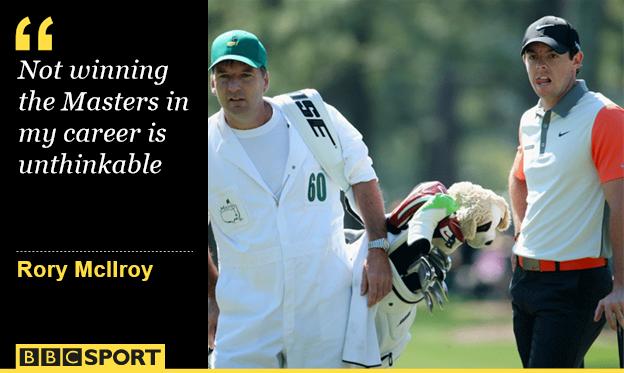 Mcllroy said it was unthinkable that he would not join that illustrious list at some point.

"If I was to look back as a 60-year-old at my career and had not won a green jacket I would be very disappointed," he added.

"It is the only one left and it is a course I feel I can do well at. I feel I could win multiple times, but getting that first one is the most important thing.

"Winning all four majors means you are a complete player. I can achieve something special."