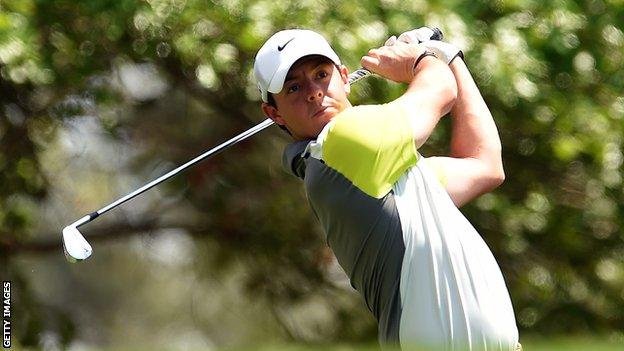 Ernie Els is convinced Rory McIlroy will complete the career grand slam with a Masters victory and predicts the Ulsterman will land at least four green jackets.

But the 45-year-old South African, who has won two Open and two US Open titles, is living proof there are no guarantees when it comes to winning at Augusta.

Back in the mid-1990s, when the South African was at a similar age to the 25-year-old McIlroy, he was considered a near certainty to don the famous green jacket. Two decades on Els is still waiting.

Twice a runner-up, there was a spell when he spent five straight years without finishing outside the top six at Augusta.

Els, though, is convinced McIlroy will not be similarly frustrated. "I can't see that with Rory," he told BBC Sport in the run-up to this year's tournament, which starts on Thursday, 9 April.

"He's too good. He's playing against great players but, you know, Rory has that factor where when he's on these other guys can't play with him.

"There are no guarantees in this game but I'd say he would win at least four.

"But he's got to do this first one and then the other ones will be easier. This one is going to be quite big."

Els shares the same Florida base as McIlroy and knows the reigning Open and PGA Champion's game well.

"I saw Rory last week at the Bears Club practising," he continued. "We talked about the swing a little bit and that he can hit it both ways from where he has the position in his backswing now.

"I love his backswing now and I think he is going to be OK."

Els said he would not have believed, had he been it told 20 years ago, that he would still be waiting for an Augusta victory in 2015.

"Absolutely, and bear in mind in my first Masters I finished eighth behind Jose [Maria Olazabal] and Tom Lehman," Els said. "I actually had a chance on the final day but I didn't quite have the game.

Yet Els knew how to win majors. He first won the US Open in 1994 aged 24 and added another at Congressional three years later.

At Muirfield he collected his initial Open title in 2002 but had to wait a decade before collecting his fourth and latest major title with victory at Lytham.

"There was something about Augusta," he said. "I almost wanted it too badly and I know a lot of players have done the same as what I've done in my career.

"Johnny Miller and Tom Weiskopf - there are quite a few guys who had great games but didn't win it."

Els isn't ready to discount his own chances at the Masters, though. Asked whether he can contend at Augusta next week, he said: "Yes I think so, why not?

"I will definitely have the crowd on my side. I've been going there for many, many years and I just want to get my game ready and get the nerves to settle."

There is no doubting the four-time major champion's appetite for competing is as strong as ever. He is planning on playing an astonishing schedule of more than 40 tournaments for the second year running.

"I'm really enjoying the game," he smiled. "There are some really good young players out here and I'm running out of time.

"But I'm trying to find that little extra of what it takes to win a major or another tournament. That's my goal - my family is being patient with me.

"I'm 46 in October. Statistics are against us but a lot of the guys at my age, Retief Goosen and Phil Mickelson, quite a few of us, we want to prove some of the critics wrong and prove that we can win majors at our age.

"The game has changed and the way we look after ourselves, and with modern equipment we can play with these young players but, obviously, time is running out."

This will be Els's 21st attempt at landing that elusive green jacket. By his own admission it is a case of now or never, especially against a generation headed by a player of McIlroy's talents.

Listen to the full interview on BBC Radio 5 live from 14:30 BST on Easter Sunday.