Jordan Spieth enjoyed another sensational day at the Masters as he fired a six-under-par 66 to take a five-shot lead into the weekend.

The 21-year-old closed his second round on 14 under, a new record score after 36 holes, with world number one Rory McIlroy in a tie for 19th on two under after flirting with missing the cut before shooting a 71.

Only Spieth's fellow American Charley Hoffman, who bogeyed the last for a 68 to finish on nine under, was initially able to cling on to his heels.

But England's Justin Rose (70) and Paul Casey (68) made charges late on a sticky afternoon to share a tie for third on seven under with Dustin Johnson, who had a Masters record three eagles in his 67, and will hope to pressure the callow leader over the weekend.

Three-time Masters champion Phil Mickelson produced a series of remarkable escapes from off the fairways to battle to a four-under 68 and six under total, while four-time winner Tiger Woods finished two under after picking up three shots in his round of 69. 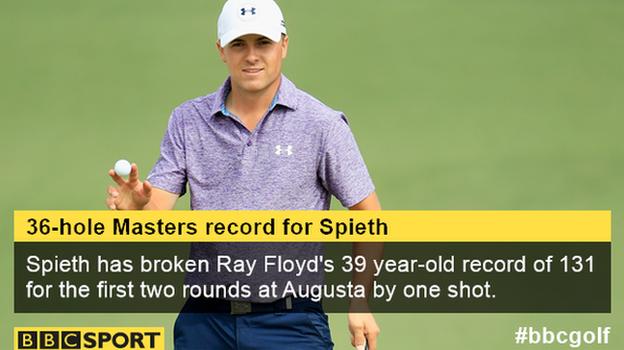 But it was Spieth - playing with remarkable poise for a man of his years - who set Augusta National alight.

Eight under overnight, he birdied the par-five second and difficult fifth before hitting a 229-yard approach to within three feet on the par-five eighth, having found a fairway bunker off the tee.

Further birdies followed on the 10th, 13th and 15th as a nerveless display with the putter backed up relentless accuracy with his irons.

A year ago he excelled on his Masters debut, holding a share of the lead going into the final round before becoming the youngest golfer to finish in second place.

But that was with a cumulative five under, three shots off champion Bubba Watson. This week he has been almost unstoppable, conceding only one bogey in his first 36 holes.

And while the history of the tournament is littered with the tales of players who blew big leads at a far later stage of the tournament - Greg Norman spurned a six-shot advantage in 1996, McIlroy four in 2011 - Spieth has so far shown minimal sign of struggling under the weight of expectation.

Not since Ray Floyd in 1976 has a Masters champion led from start to finish, indicative of the way this course can snare and punish even a man in rare form.

McIlroy, chasing his third consecutive major and attempting to become only the sixth man in history to complete the career Grand Slam, endured a tough day.

His putting was fragile - he double-bogeyed the ninth and three-putted the 14th when well placed - and his temperament tested.

Having drifted beyond the projected cut mark of two over on the ninth, he picked up a birdie on the par-four 10th before hitting his second shot on the par-five 13th to a couple of feet for an eagle that saw him back to level par.

A further birdie on the 15th and two more on the 17th and 18th holes saw him end the round with some momentum to take into the weekend.

Meanwhile, Rose began the day five under only to bogey three of the first four holes, but birdies on the eighth and 10th reignited his round before another on the par-three 16th moved him level with compatriot Casey.

Casey was four under for the day, his two rounds containing just one bogey and signalling a continued revival in his form after some difficult times.

It was left to Hoffman, with three consecutive birdies on 12, 13 and 14, to keep up a chase that just after lunch looked in danger of becoming a romp.

The unheralded 39-year-old finished down in 27th on his only previous appearance at Augusta and despite that bogey on the final green continues the late blossoming that saw him bag five top ten PGA Tour finishes in 2014.

Four-time major winner Ernie Els had four birdies and four bogeys in a level-par 72 and at five under is nine shots adrift in seventh.

Woods again struggled off the tee but continued to impress with his under-fire short game to make a cut that many thought he would miss when he arrived.

Should Spieth go on to win he would become the second youngest man behind Woods to win the Masters, while it is not inconceivable that Woods' record low score - his 18-under 270 in his remarkable first win in 1997 - could be broken.

That is for the weekend. But with Spieth having won one of his last three tournaments and finished runner-up in the other two, he is in the mood and form to make history.