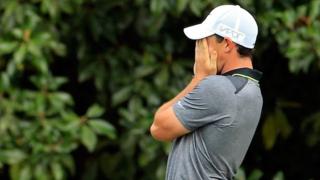 Northern Ireland's Rory McIlroy says he hoped to be six or seven behind Masters leader Jordan Spieth but is frustrated with his score of 71 after day two.

The world number one is two under at halfway, 12 shots behind America's Spieth who shot a six-under 66 and leads the field by five.

McIlroy is in a tie for 19th after flirting with missing the cut before shooting a 71.