Jordan Spieth will go into the final round of the Masters nursing a four-shot lead over England's Justin Rose with three-time champion Phil Mickelson heading a charging pack behind.

Rose conjured up five birdies in his last six holes, including a chip-in from the bunker on 16, to finish on 12 under and remain in the hunt for his first Green Jacket.

His hopes of winning might also be buoyed by some uncharacteristic errors by Spieth towards the end of his round. He double-bogeyed the 17th and sliced his approach to the 18th green into the crowd, but recovered his composure to save par.

Spieth's late wobble sets up an enthralling Sunday afternoon after a low-scoring thriller of a third day saw contenders rise and fall in their pursuit.

The young Texan's two-under-par 70 left him on 16 under, a new Augusta record after 54 holes, and kept him on track to become the second youngest Masters champion in history behind Tiger Woods. 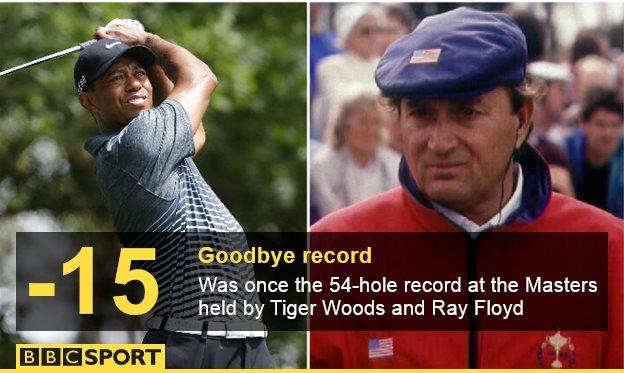 And Woods's record score of 18 under, made in his epoch-changing debut win in 1997, is also in danger from a performance that for most of the first three days has borne striking similarities.

But Rose is on his tail after fighting back from a dropped shot on the first and another on the fifth to storm through the back nine, draining a horrible downhill birdie putt from the fringes on the last to go clear in second.

Mickelson's five-under 67 puts him on 11 under, his six birdies igniting the galleries around the sun-baked course, with Woods and world number one Rory McIlroy both scoring 68s to tie for fifth on six under.

All three piled the pressure on the precocious Spieth until late dropped shots hurt McIlroy and Woods, with Mickelson missing another birdie putt by a fraction on the 18th.

Charley Hoffman, second overnight, remains in contention at 10 under after shooting 71 to add to his 67 and 68 over the first two days.

Not since Ray Floyd in 1976 has a Masters champion led from start to finish, indicative of the way this course can snare and punish even a man in rare form.

The history of the tournament is also littered with the tales of players who blew big final day leads - Greg Norman spurned a six-shot advantage in 1996, McIlroy four in 2011.

On a day rendered perfect for low scoring by warm, still conditions and greens far softer than usual at Augusta National, McIlroy had eagled the par-five second.

He then birdied the eighth and ninth to go out in 32, before picking up another shot on the par-five 15th only to bogey the par-three 16th and drop another shot with a sloppy putt on the last.

It was a disappointing end to a round that had got off to a promising start, and McIlroy feels he would need to shoot either "a 61 or a 62" or Sunday to have any chance of victory.

There was a positive for McIlroy, though, in that he carded birdies on all the par-fives, meaning he is 11 under in 12 opportunities, a strategy set out before he arrived at Augusta.

Woods, three pairings behind, was another to cash in, his putter and short irons again working wonders after more problems with his driver.

The four-time Masters champion matched McIlroy's 32 on the front nine and then picked up an extraordinary birdie on the par-five 13th when he looked certain to drop at least one shot.

His drive hooked left as his clubhead hit the turf before making contact with the ball, but he managed to first find his ball and then chip out, before a brilliant wedge to 20 feet was followed by a wonderfully judged putt.

Mickelson, three times a Masters champion, is loved in these parts like no other player.

Four birdies on the front nine took him to 10 under, taking four shots out of Spieth's huge overnight lead.

He also understands exactly what is required on this capricious course, and despite a dropped shot on 17 will still fancy his chances of another inspired final day.

McIlroy, by contrast, will almost certainly have to wait another year to become only the sixth man in history to complete the career grand slam.

The champion in two of the last three years, Bubba Watson, double-bogeyed the first and then took back those dropped shots with birdies over each of the next three holes.

It set the pattern for an uneven round in which he parred only five holes, and at one under his challenge this year seems over.

England's Paul Casey had looked at one stage that he could be a potential challenger to Spieth, as a birdie on the third moved him on to eight under.

However, bogeys on the seventh, 16th and 18th means he signed for a two-over 74 and will start Sunday five under, 11 shots off the pace.

Ian Poulter produced his best round of the week, carding five birdies in a bogey-free five-under 67 that moved him to four under for the tournament.

Finally, Lee Westwood shot a two-under 70 and is even par after three rounds, compatriot Danny Willett carded a 76 and is two over while Wales' Jamie Donaldson and Northern Ireland's Graeme McDowell both hit 76s and are tied on five over.

European Ryder Cup captain Darren Clarke had eight bogeys and three birdies in a five-over 77 that dropped him to six over.