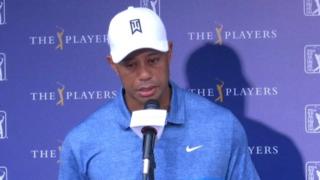 Break-up has been brutal - Woods

Former world number one Tiger Woods says his break-up from US Olympic skiing champion Lindsey Vonn has been "brutal."

The split was announced on Sunday, the ninth anniversary of the death of Woods's father, Earl, and the 14-time major winner revealed that he had not slept in three days.

Woods will play at the prestigious Players' Championship at Sawgrass this week, his first tournament since the Masters in April, when he finished in a share of 17th place.