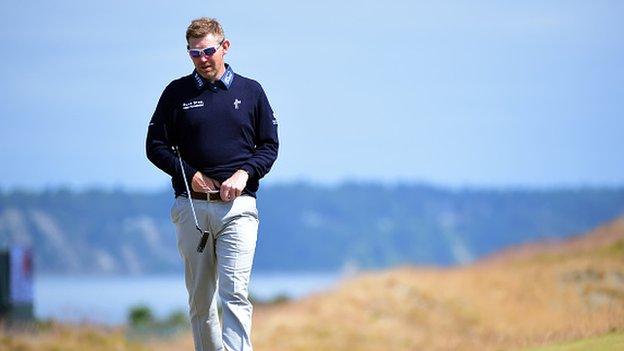 Stephen Gallacher says this year's US Open course feels like playing on any championship course in Scotland.

Gallacher, one of five Scots teeing off on Thursday at Chambers Bay in Washington State, qualified via placing in the top 60 of the world rankings.

"It's very Scottish looking on the eye," he said. "You could be playing any course in Scotland: Dornoch, Castle Stuart or Kingsbarns.

Gallacher starts his first round with Ben Martin and Shane Lowry at 22:40 BST.

Colin Montgomerie, Jimmy Gunn, Bradley Neil and Marc Warren are the other Scots in the field.

Gallacher says the course near Seattle is "playing quite quick" and will provide players with a stern test.

"The holes play differently off the different tees," he added.

"You can see that they're going to move pins about and move the tee up so you can have an attack at it.

"If you miss it [the green] on the wrong side then you can be miles away. They're generous off the tee and you can hit the fairways. Then it's strategic and all about where you put your second shot.

"You're going to see a lot off putting from off the greens as well."