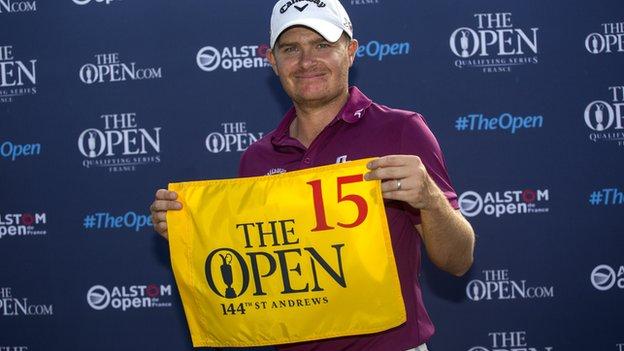 Surrey golfer James Morrison and US-based Greg Owen, from Nottinghamshire, have both qualified for next week's 144th Open Championship at St Andrews.

Morrison, 30, claimed one of the three places on offer at the Open de France, along with South African Jaco Van Zyl and Spaniard Rafael Cabrera-Bello.

"As soon as you turn up at St Andrews, you have an amazing feeling," he said.

Owen, 43, from Mansfield, won one of the four places on offer in West Virginia at the Greenbrier Classic.

He qualified for his second St Andrews Open along with the winner, Korea-born New Zealander Danny Lee and Americans David Hearn and James Hahn at the US PGA tour event.

"I've qualified every way possible now," said Owen, 43 from Mansfield, who will be playing in his eighth Open, but only his second in eight years.

"I've played well at St Andrews in the past in the Dunhill Cup and I made my first cut in The Open there in 2000 so I'm very excited to get back.

"It's the history that sets St Andrews apart. It's the home of golf, you know the holes inside out. Everyone knows about 17 and 18. You can relate to it and picture where you need to hit the ball. But I've not played it since the new tees have been put in so I've some work to do."

Morrison, who tied for 23rd place in his only previous Open appearance at Royal Lytham in 2012, added: "I cannot wait. It's every boy's dream.

"I love it at St Andrews. It is one of the only golf courses where you get that feeling. I have seen all the videos and photos of the stands going up - it is going to be rocking."