World number one and defending champion Rory McIlroy will miss next week's Open after injuring his left ankle.

The Northern Irishman, 26, revealed on Monday he had ruptured an ankle ligament playing football with friends.

Confirming he would not compete at St Andrews, he posted on Instagram: "I'm taking a long-term view of this injury.

"Although rehab is progressing well, I want to come back to tournament play when I feel 100% healthy and 100% competitive."

The 2015 Open begins on 16 July, and tournament organisers said they were "naturally very disappointed" at McIlroy's withdrawal.

They added: "Rory will play in many more Opens and our primary concern is for his complete recovery."

McIlroy, who has won four majors, could also miss the chance to defend his US PGA Championship title in mid-August.

How did it happen?

McIlroy ruptured his left ankle ligament on Saturday during a "soccer kickabout with friends".

On Monday he wrote on Instagram: "Total rupture of left ATFL (ankle ligament) and associated joint capsule damage. Continuing to assess extent of injury and treatment plan day by day. Rehab already started..... Working hard to get back as soon as I can."

At the time, McIlroy had not ruled himself out of the Open and an announcement on his condition had not been expected until the weekend.

McIlroy finished fourth at the Masters in April, and joint ninth at last month's US Open. Both tournaments were won by American Jordan Spieth.

The Northern Irishman missed the cut at the Honda Classic in March, but won the World Golf Championships Match Play and the Wells Fargo Championship in May. 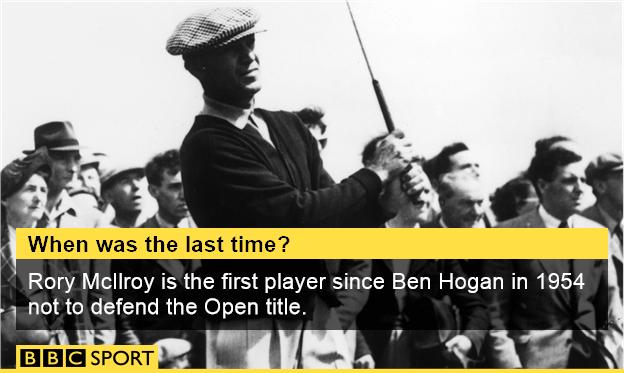 How the golfing world reacted

McIlroy's Ryder Cup team-mate Graeme McDowell: "I wasn't expecting him to play in the Open, so I'm not surprised he's pulled out. But it's a massive blow for the tournament, he's the world's number one player.

"No-one would love to stop Jordan Spieth in his tracks next week more than Rory. With the fun rivalry going on and everything, he's going to be gutted. I saw the golf course last Saturday and I believed that Rory was rightly a favourite. I thought he'd get it done round there."

Former US Open champion Justin Rose: "I would have been surprised if he was there given the initial diagnosis but it's a big shame for him and the tournament."

Florida-based Scot Russell Knox who was first reserve and replaces McIlroy in the field at St Andrews: "Nobody wants to get in because someone got injured but I am happy I am in the field and can't wait to give it a blast."

Spieth said McIlroy had done nothing wrong by playing football with friends ahead of the Open: "It's unlucky, it's unfortunate and I'm sure he's taking it harder on himself than anybody else.

"But I don't think he did anything wrong. It just was an unfortunate situation and hopefully he rebounds quickly and gets back right to where he was."