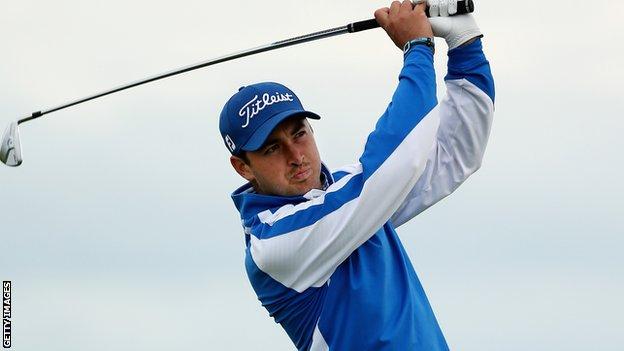 Daniel Brooks takes a one-shot lead into the final round of the Scottish Open as defending champion Justin Rose's challenge faded at Gullane.

Rose had started in a group of six players three shots behind his fellow Englishman, but a two-over-par 72 left him three shots further adrift.

Brooks recovered from a double bogey at the opening hole to finish with a 69 and a 12-under-par total.

He said: "It's good to get off to a bad start and hold it together."

The 28-year-old had missed 13 cuts in succession before finishing joint 20th in France last week.

"It would be amazing to win - that's what we play for," said Brooks. "It's the biggest day of my career, but I am trying not to think about it."

Frenchman Raphael Jacquelin is a shot behind after a best-of-the-day 64.

The 41-year-old had a bogey-free round and says he is enjoying his golf again after improved performances in the previous three tournaments.

"That last three months have been really difficult for me and were definitely not fun as I have been struggling to hit the ball on the fairway and on the greens," he told BBC Scotland.

"I've been practising hard, working on my game as usual, but sometimes it takes a long time to come back.

"I will try again to keep smiling tomorrow even if the ball doesn't go in the hole and we'll see what happens."

Rickie Fowler, of the United States, Joost Luiten, of the Netherlands, and England's Tommy Fleetwood are two shots behind the leader.

A further shot back is England's Eddie Pepperell, who had a 65 - the second best round of the day.

Russell Knox is in the same group as Pepperell, an eagle at the 16th helping him to a 66 that means the Florida-based Scot leads the home challenge after Paul Lawrie could only shoot a 69 to lie two shots further back.

Knox, who will also play at next week's Open at St Andrews, says some extra practice on Thursday evening had helped improve his scoring.

"I never hit balls after a round, but last night I did because I felt I was struggling," said the 30-year-old.

"I don't know what I found - probably nothing changed except for just hitting a couple of good back-to-back shots to the greens - and today I came out swinging lovely and gave myself a lot of chances.

"I know that, if I hit it like I did today tee to green I'll give myself an opportunity and that's all that matters."