Englishman Chris Wood could end up being the most frustrated golfer at St Andrews when the 144th Open Championship begins on Thursday.

The Bristol professional, who has twice enjoyed top five finishes in his five Open appearances is now listed as the first reserve.

Six players have so far pulled out of The Open, catapulting Wood up the list for the 156-strong field.

But it now appears unlikely that there will be any more late withdrawals. 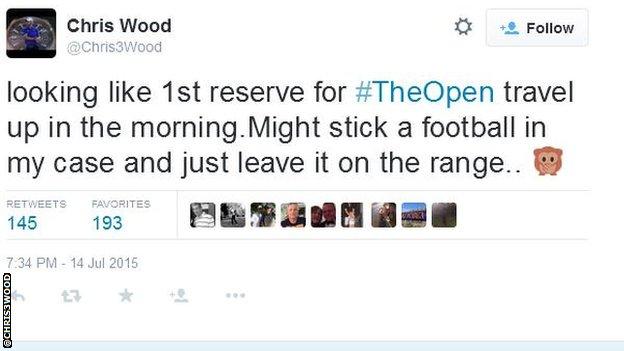 Having flown up on Wednesday morning, Wood is now experiencing what might be best described as 'withdrawal' symptoms, as he is now on stand-by until the last group has teed off on Thursday afternoon at 16:13 BST.

"It is the most frustrating experience I've ever had to endure as a golfer," said Wood. "Not one I want to repeat.

"You can't really prepare mentally for something like this. It's just a matter of going through my routine as best I can and waiting to see what happens.

"It's doubly frustrating that I know that I've played well around here before. I know I can compete on this stage. I've done it before in Opens. You just can't express how frustrating that feeling is.

"I know the course pretty well so I don't need a lot of practice rounds. I've got a good knowledge of where to avoid on the course. it's just getting the chance to get out there."

Wood, currently ranked 90th in the world, even suffered frustrations in his journey to Fife, having been forced to fly from Cardiff, because all the flights from nearby Bristol Airport to Edinburgh were booked.

He arrived in St Andrews at 12:00 BST on Wednesday to play a practice round on the famous Old Course.