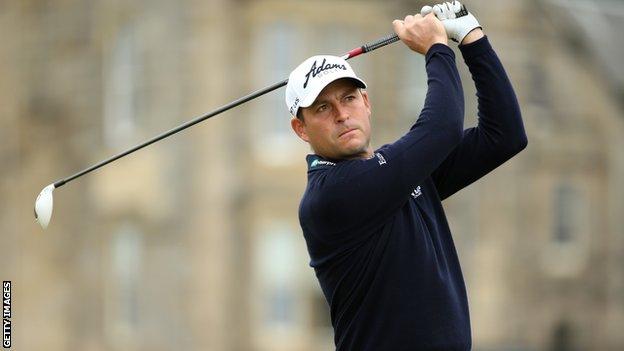 England's David Howell insists that he can challenge strongly for the Open Championship this week after starting with a four-under-par 68.

The 40-year-old was level with compatriots Luke Donald and Greg Owen, after the first round.

"I finished top 15 last year, I'm playing some of the best golf of my life and I've won round St Andrews."

He added: "If I play as well as I can, I'll be there or thereabouts on Sunday."

On his first round in an Open at St Andrews, Howell did all his work on the front nine, as he picked up a birdie at the first, then three more at six, seven and eight to go out in four-under 32.

He twice got to five under, only to be pegged back by bogeys, before holing a six-footer on the last for par.

"I started with a birdie, ended with a nice putt for par, which bookended it quite nicely," he added. "It was six feet but, as I stood over it, I thought I deserved a 68, I put a good stroke on it and in it went.

"I wouldn't have bothered playing if you'd given me a 68 at the start of the round but it was a lot more fun to go out and play it.

"People were coming out of the starting gate fast. I was one of them, and you have to keep your foot down.

"I got on the good side of the draw, just like it worked for Louis Oosthuizen five years ago and he absolutely made the most of it

"You don't wish ill on the other half of the draw, but I'm playing late on Friday and hopefully it will be a balmy evening."