Sir Nick Faldo marked his retirement from competitive golf with a one-under-par 71 as he bowed out at St Andrews.

Twenty-five years on from his Open triumph on this course, the 57-year-old will miss the cut but recovered from a horrendous opening day to close his career in more fitting fashion.

Sporting the same pastel yellow jumper he wore in his first Open win back in 1987, Faldo birdied the famous Road Hole before standing atop the Swilcan Bridge to acknowledge the applause from the packed galleries.

He then parred the last before raising his arms to grandstands, members of his family greeting him as he walked slowly across the green towards the Royal and Ancient clubhouse.

He said afterwards: "The goal was to stand on the bridge and get the picture. I knew I was going to bust out my old Pringle.

"I was just trying to say, 'Thank you, St Andrews'. That's why I looked at the gods on 17 - I thought, thanks very much for that.

"I felt pretty beat up on Thursday, but that was one of the great moments of any career, making a three there and walking the walk. That won't get any better." 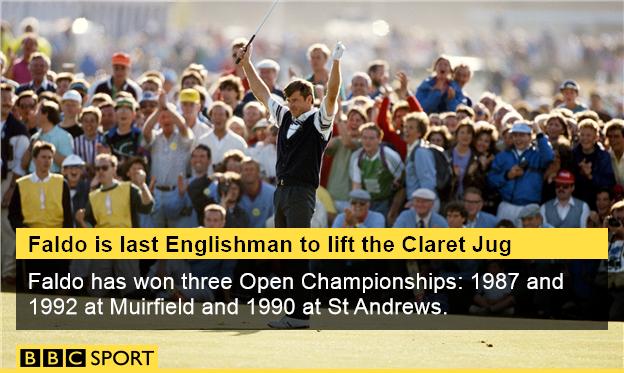 Faldo had endured a nightmarish first round in his 37th Open, propping up the field on 11 over after a round that included eight bogeys and a triple-bogey eight on the par-five 14th when he lost his tee shot.

Having suffered a bad cut on his finger earlier in the week, he made a last-ditch trip to hospital on Friday morning to have it re-glued before dashing for a tee time delayed by the heavy rain and flooding.

Playing alongside compatriot Justin Rose and American Rickie Fowler, he bogeyed the par-four second but then went on a run of six pars before picking up consecutive birdies on the ninth and 10th.

It was never going to be enough to save the three-time champion from missing his eighth cut in the past nine editions of the oldest major, but it allowed him to enjoy his valediction as the appreciative crowds bade him a warm farewell.

Faldo, the last Englishman to win The Open, said: "I've been 11 years on TV [as a commentator] now, so I'm not going to be a golfer again.

"This morning my cut was open again, and I didn't know what I wanted to do. The kids looked at me and said, 'Dad, what are we doing?'

"I was dying to make the cut for [my son] Matthew. That's what I've been trying to do for the last 10 years, but it's tough - I play two tournaments a year, and you can't.

"If I've just shot 71 and done all that today, I think that might be my last walk."

Faldo has recorded eight top-five finishes at The Open and still holds the record for the highest number of rounds under 70.

And just as Jack Nicklaus made his own farewell to professional golf on Swilcan Bridge a decade ago, so Faldo was delighted to leave on his own terms.

"That relaxed me at the last because I said, 'I don't care what I do up 18 now because I've just made three at 17. That's unbelievable.'"