American Dustin Johnson leads at the halfway stage of The Open, which will finish on Monday for only the second time after two days of bad weather at St Andrews.

After an almost 11-hour delay because of wind on Saturday, world number four Johnson carded a second-round, three-under-par 69 for 10 under overall.

He is one shot clear of England's Danny Willett (69) and two clear of Scotland's 1999 champion Paul Lawrie (70) while compatriot Marc Warren (69), who finished his round on Friday, is one further back in a group of six on seven under.

Grand Slam-chasing Jordan Spieth carded a 72 and is five under.

Three-time winner and former world number one Tiger Woods struggled to a 75 for seven over and missed only his second cut in 19 Open appearances.

The plan is for the third round to take place on Sunday, before the final round on Monday.

The only other time in the tournament's 155-year history that The Open spilled over into a Monday was when Seve Ballesteros won at Royal Lytham in 1988. 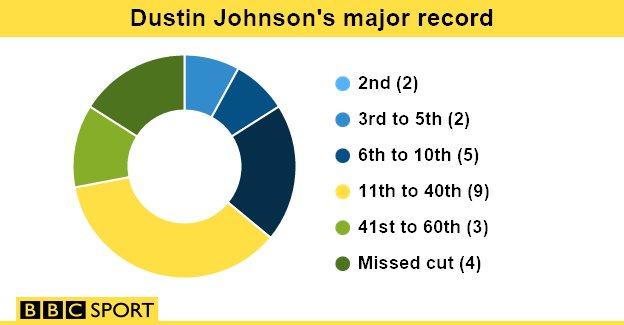 Torrential downpours on Friday delayed play for more than three hours and meant 41 players would have to complete their second rounds on Saturday.

Play resumed at 07:00 BST but with gusting winds moving balls on the greens, play was suspended at 07:32 BST and did not restart until 18:00 BST.

Johnson bogeyed one of the two holes he completed before the suspension, while playing partner Spieth was only one of the many players who complained that they should not have been sent out in the first place.

"This morning when we started it was almost impossible," said Johnson, who finished second behind Spieth at last month's US Open.

However, golf's governing body the R&A defended its decision, saying in a statement: "Gusts of wind increased in speed by 10-15% after play resumed.

"This could not be foreseen at the time that play was restarted and made a material difference to the playability of the golf course."

By the time the players were back out on the course in the evening, the greens had been thoroughly dried out by the wind and the sun, which shone brightly throughout the day, creating a false air of serenity.

England's former world number one Lee Westwood made double-bogey at the 16th and bogey at 17, finishing with a 73 for level par overall to finish right on the cut mark.

Former Masters champion Charl Schwartzel, who was six under overnight and within striking distance of the leaders, double-bogeyed the 17th and finished five off the lead.

Two-time Masters champion Bubba Watson resumed on level par after 15 holes but bogeyed the 16th and made a triple at the 17th. The world number three finished with a birdie but missed the cut by three shots. 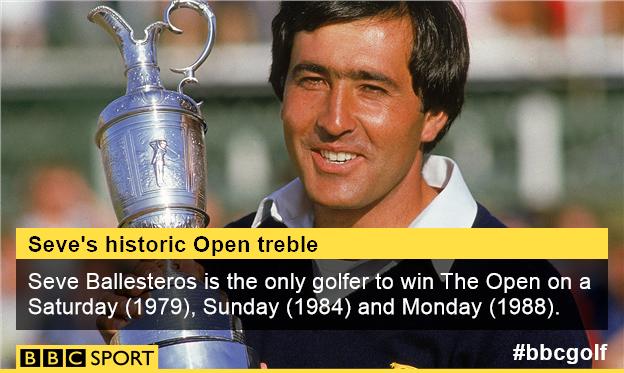 Lawrie, 46, resumed on eight under after 12 holes and parred the last six to keep himself in contention for a second Claret Jug.

South Africa's Louis Oosthuizen, winner at St Andrews in 2010, is seven under after a battling 70, as is Australia's Jason Day after a 71.

Former world number one Luke Donald (-6) and former US Open champion Justin Rose (-5) are well positioned to become the first English winner of the tournament since the 1992 success of Nick Faldo, who played his last Open round on Friday.

Spain's world number 10 Sergio Garcia, still seeking his first major title, was one of the few players to thrive in the adverse conditions on Saturday, with birdies on the last two holes for a 69 and five under overall.

Heavy rain is forecast for Sunday morning but it is expected to be drier and brighter by midday. More showers are possible in the afternoon - but there is nothing in the Met Office's predictions to suggest play will be interrupted.

Monday looks more interesting, with a dry, bright morning forecast, followed by showers and strong winds after midday. Whoever is lifting the Claret Jug a day late might need an umbrella.

The R&A announced that people who bought tickets for Saturday's play would receive a 60% refund, despite those that stuck around being treated to only three hours of golf.

R&A chief executive, Peter Dawson, defended the decision, saying that "a lot of people I know had a good time out there".

"We have had quite a bit of golf and our decision to open up the Championship to a very low price of £10 on Monday is the right thing to do. Let's hope we get a lot of people taking advantage of that."