On a day of benign weather and spectacular scoring, Dunne, 22, carded a six-under-par 66 for 12 under overall.

South Africa's Oosthuizen, who won on the Old Course in 2010, carded a 67, as did world number nine Day.

American Jordan Spieth remained on course to win the first three major titles of the year after a third-round 66 left him 11 under.

Two-time champion Padraig Harrington (65) is fifth on 10 under, while the nine-man group one shot back includes Spain's Sergio Garcia, English pair Justin Rose and Danny Willett, and Australia's Adam Scott.

Overnight leader Dustin Johnson carded a 75, the second-worst round of the day, which saw him finish on seven under.

The Open will finish on a Monday for only the second time in its 155-year history because of adverse weather on Friday and Saturday.

The Old Course lowers its defences 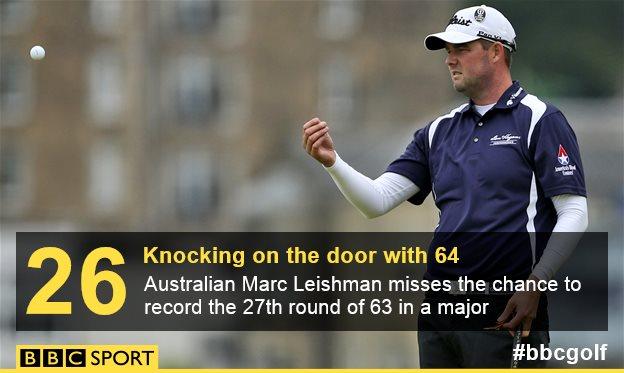 For the third round on Sunday the Old Course was almost defenceless, with barely a breath of wind, blue skies and warm sunshine on Scotland's east coast.

The conditions made for some thrilling golf, with birdies flying in all over the ancient links and the lead changing hands throughout the day. It was just what the tournament needed after two days of frustrating weather delays.

Marc Leishman grabbed the early clubhouse lead after an eight-under-par 64 left him nine under but the Australian was soon gobbled up by later starters.

Dunne, from Greystones, County Wicklow, is aiming to become the first Irish winner of the Silver Medal for lowest amateur since world number one Rory McIlroy in 2007.

Dunne's three-round total of 204 broke the previous record for the lowest score by an amateur over the first 54 holes of an Open, set by Iain Pyman at Royal St George's in 1993, by six shots.

However, Dunne still has competition for the Silver Medal - American Jordan Niebrugge is only three shots back after a 67.

"I'm not really going to think about winning or where I'm going to finish until the last few holes," said Dunne.

"I don't see why [an amateur could not win a major]. I'm well capable of shooting the score that I need to win if everyone else doesn't play their best."

Harrington, winner in 2007 and 2008, is currently ranked 102 in the world and has missed 11 cuts this season. But the 43-year-old says his previous experience of contending on the final day of The Open might give him an advantage.

"I'll certainly be telling myself that I've done it twice before," said Harrington, who was also full of praise for Dunne.

"There's not too many people who have been leading going into the third round of The Open as an amateur - it's phenomenal. If I don't win, I hope he does."

Spieth, a year younger than Dunne, is bidding to become the first man since Ben Hogan in 1953 to win the Masters, US Open and Open in the same year.

"I recognise what's at stake," said Spieth. "But 'free-rolling' is the phrase I'd use [to describe his attitude].

"I'm going into the final round with plenty of confidence and comfort, which frees me up a little bit to take extra chances."

Sir Nick Faldo, who was playing in his final Open this year, was the last Englishman to win The Open, in 1992. But former US Open champion Rose believes he has the round in him to break the 23-year hoodoo.

Rose's compatriot Willett remains in the hunt despite a disappointing 72.

Fellow Scots Paul Lawrie, winner in 1999, and Marc Warren were in the penultimate group but neither man was able to find his form of Saturday.

Lawrie double-bogeyed the 17th on his way to a 74 and finished on six under, while Warren carded a 72 to remain seven under.

On his Twitter feed, Lawrie, who is bidding to become the first Scottish winner at St Andrews since James Braid in 1910, simply stated: "Sulking."

All set for a magnificent Monday?

Those who wrote this year's Open off as a dud after two days of adverse weather might be feeling foolish on Monday evening, with a grandstand finish likely and so many great storylines possible.

World number 10 Garcia is still seeking his first major title after many years of near-misses, including blowing a three-shot lead in the final round at Carnoustie in 2007.

Former Masters champion Scott, the world number 11, at least has a major title to his name but he, too, will have redemption on his mind.

At Royal Lytham in 2012, Scott led by four shots with four holes to play before falling apart down the stretch and handing the Claret Jug to Ernie Els.

South Africa's Retief Goosen, also on nine under after a 69, would become the oldest Open champion in history were he to win at St Andrews - he is 46 years and 167 days old on Monday, 162 days older than Old Tom Morris was when he won at Prestwick in 1867.

There is expected to be a dry start to Monday, followed by persistent rain in the afternoon. The wind is also forecast to strengthen as the day progresses. But with entrance prices set at £10, it will be the hottest ticket in town.