Dustin Johnson made a strong start on his return to Whistling Straits as he took advantage of an early tee time to lead at the US PGA Championship.

The American, who was given a two-stroke penalty with victory in his sights at the same course in 2010, shot a first-round 66 for six under par.

Swede David Lingmerth briefly matched Johnson's score but ended the day on five under as the wind strengthened.

Late starters Rory McIlroy and Jordan Spieth finished on one under par.

Four-time champion Tiger Woods carded a 75 as he struggled to three over, and he faces a challenge to make the cut on Friday.

McIlroy, the world number one, was playing his first tournament since June after recovering from a ruptured ankle ligament.

The Northern Irishman was in a group with this year's major winners - Masters and US Open champion Spieth and Open champion Zach Johnson - and all three had to work hard in testing conditions.

Among the early starters, Englishmen Justin Rose and James Morrison both carded 69s to end the day on three under par, along with Denmark's Thomas Bjorn, with England's Paul Casey a shot back on two under. 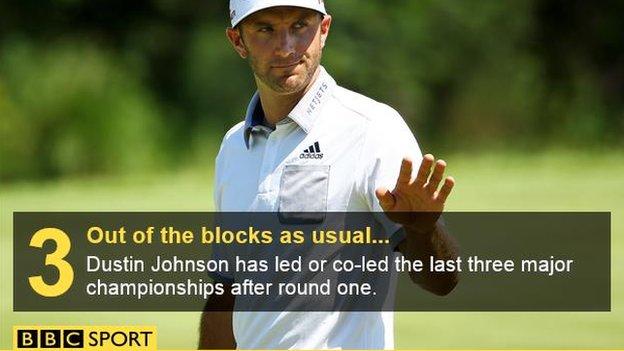 The American has launched another strong challenge at a major, having led after two rounds of the Open and been in contention until the 72nd hole of the US Open.

Johnson capitalised on an early start, when conditions were breezy but considerably more kind than later in the day when the wind got up.

"Today was pretty easy, I would have to say," said Johnson. "I was swinging well and I was hitting the shots where I was looking and I really felt like I was just super patient, stayed focused all day.

"I really felt like I had my ball under control a lot like I did at the US Open."

If Johnson made the best of the early conditions, the stellar group of McIlroy, Spieth and Johnson had varying degrees of success in dealing with the gusting afternoon breeze and were warned for slow play from the 15th.

McIlroy began and ended with bogeys and found bunkers and water along the way, but still managed to finish in the red numbers at one under par.

"It was a solid round of golf," said McIlroy. "I'm happy with the way I struck the ball. I think anything under par this afternoon was a decent score."

Spieth, who hopes to overtake McIlroy in the rankings this week, made 10 successive pars before finally bogeying the 11th, but two birdies on the way home brought him level with the world number one.

It was Open champion Johnson who struggled most, battling to reach the turn at even par despite three bogeys, before his resistance crumbled on the back nine for a final score of three over par.

The 39-year-old, who has won 14 major titles, made five bogeys to slip nine shots behind the early leader.

Woods is ranked 278th in the world and having missed the cut at the past two majors - the US Open and the Open - he now faces a battle to avoid missing a third in a row.

"I hit it great today, but I made actually nothing," said the 14-time major winner. "Probably one of the worst putting rounds I've had in a very long time.

"But I hit it good today, so that's about it. I just had no feel at all for the speed [on the greens]. It was awful.

"My speed was bad, hence speed determines line, so that was off. I either left them short or blew them by. Just didn't have the speed at all."

From two over par after four holes, Rose recovered with five birdies in the next 11 as he posted an opening 69.

"It's the perfect start, really," said the world number six.

"I think obviously when you go and shoot seven, eight or nine under in a major in the first round, it's a lot of pressure to absorb for the rest of the week, because you're in contention.

"It's a platform on which I can build now for the rest of the week. You can never win it on Thursday, you can only lose it."