Rory McIlroy made a solid start to the defence of his US PGA title with a round of 71, just 40 days after injuring his ankle playing football.

The world number one from Northern Ireland ended the opening day one under par in testing windy conditions at Whistling Straits, Wisconsin.

"It's great to be back - I was quite nervous on the first tee," he said.

"The ankle feels great, it's felt great all week. It's not an issue and I've got full confidence in it."

McIlroy, 26, was competing for the first time since he tied for ninth place at the US Open in June, having been forced to withdraw from last month's Open Championship at St Andrews with a ruptured ankle ligament. 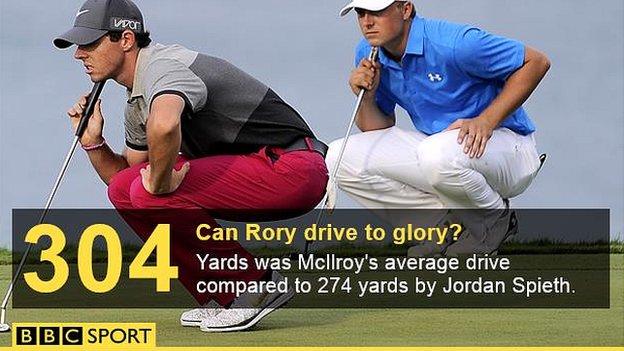 The 2012 and 2014 champion was in a group with this year's major winners - Masters and US Open champion Jordan Spieth and Open champion Zach Johnson - which teed off in the afternoon as the wind began to blow.

An opening bogey five hinted at nerves but McIlroy hit back immediately with a birdie at the second, and then conjured up a fine up-and-down after rolling up his trouser leg and playing from the water beside the fifth green.

By the time he birdied the 16th, the four-time major winner had moved to two under, and a closing bogey on 18 barely took the shine off his return to competitive action.

"It was a game of two nines really, trying to hold on the front nine and then a few more chances on the back," added McIlroy. "The two shots on the second hole settled me down."

Spieth can replace McIlroy at the top of the world rankings at the end of the tournament, although he must finish at least third and hope the Northern Irishman has a poor result.

"I'm pleased with it," said the 22-year-old American. "Under par was a good round this afternoon.

"We really battled back after 10 and 11, which were disappointing holes for me, to salvage an under-par round and really stay in this tournament."