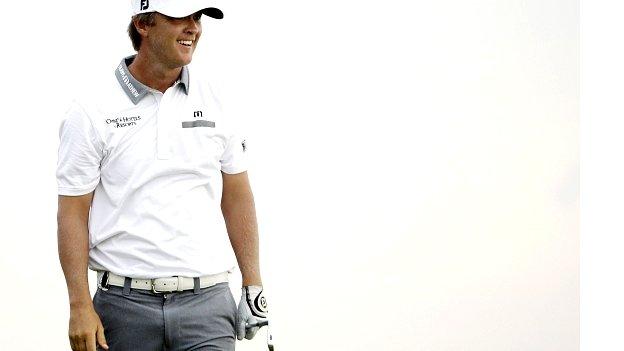 Australians Jason Day and Matt Jones were tied for the lead on nine under par at the US PGA Championship when a storm forced round two to be suspended.

Day had completed 14 holes and Jones 12 to lead by one from England's Justin Rose at Whistling Straits, Wisconsin.

World number two Jordan Spieth earlier powered to six under with a 67 as he threatens his third major win of 2015.

Rory McIlroy moved to two under after a 71, while Tiger Woods faced missing the cut at four over after 13 holes.

The four-time champion began with two birdies in the first three holes but had given those strokes back by the eighth, and was running out of holes with the cut projected at two over.

Americans Harris English and Tony Finau were still out on the course in a share of fourth place on seven under, with Sweden's David Lingmerth in the clubhouse on the same score.

Overnight leader Dustin Johnson had bogeyed three of four holes and slipped to five under after 14 when the weather intervened.

Japan's Hiroshi Iwata earlier set a new course record with a round of 63, narrowly missing out on a major record of 62.

The second round will resume at 13:00 BST on Saturday, with more than 50 players still out on the course, before the third round gets under way soon after.

McIlroy in touch despite Spieth surge

The world's two top-ranked players were paired with Open champion Zach Johnson in the showpiece group of the first two days, and Spieth and McIlroy made progress, albeit to differing degrees.

After an opening 71 on Thursday, Spieth played superbly as he opened with a birdie and was four under for the day before his first and only bogey came on the 11th.

"I feel good," he said. "I made a couple putts today. With a couple chip-ins for the week and really smart course management and good speed control, we have been able to hold ourselves in there."

Spieth could overtake McIlroy at the top of the rankings at the end of this week, and the US Open and Masters champion is well placed to become only the third man to win three majors in the same year.

McIlroy is back in action for the first time since June, having been forced to withdraw from last month's Open Championship at St Andrews with a ruptured ankle ligament.

A second successive 71 left the Northern Irishman feeling a little underwhelmed, after an eagle, just two birdies and a double-bogey at the 18th - his ninth.

"If anything, I'm probably just not as sharp with the short game as I'd like to be," said McIlroy. "There's plenty of chances out here. I've been able to hit the driver as hard as I want, and I get around 18 holes easy."

If McIlroy remains in contention, Johnson will be heading home after a 72 saw him miss the cut on three over, despite an opening burst of three straight birdies.

Hiroshi roars through back nine 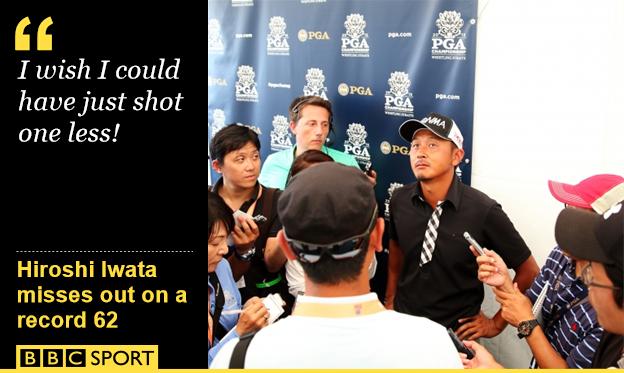 After Sweden's Henrik Stenson and South African George Coetzee went close earlier on Friday, Iwata became only the 27th man to shoot 63 at a major championship.

The 34-year-old made a bogey on the ninth but played the back nine in just 29 strokes, before narrowly missing with a chip when trying to become the first man ever to shoot 62 at one of golf's four majors.

He finished with an eagle, eight birdies and one bogey, saying: "On the back nine, after making a birdie at number 13, I was thinking that I'm going to shoot 27. I wish I could have just shot one less!"

Iwata added: "I have seen these kind of media centres on TV, but I'm honoured to be here to be interviewed. But when I came in, I thought that there was going to be more people, more media."

Daly hurls club into the lake

Former champion John Daly became so frustrated on the 10th hole that he threw his club into Lake Michigan.

The 1991 champion sliced three balls into the water on his way to taking 10 at the par three, and then hurled his wayward club into the drink.

A young boy on the back of a small boat retrieved the sodden iron and held it aloft, to cheers from the gallery.

"It shows you care, that's all," Daly said as he walked to the car park. "I'm sure I'll get reprimanded for it."

He added: "The one I should have thrown is the four iron, not the six iron."