Australia's Jason Day will go into the final round of the US PGA Championship with a two-shot lead over American Jordan Spieth at Whistling Straits.

Spieth, the Masters and US Open champion, made a superb 65 to close in on a remarkable third major of 2015.

Justin Rose bogeyed the last to end the day on 12 under, alongside South Africa's Branden Grace, who shot a 64.

The third day brought with it benign conditions, in contrast to the storm that ended play early on Friday, and scoring appeared easy at times during a thrilling afternoon in Wisconsin.

Former champion Martin Kaymer of Germany moved into contention at 11 under with a 65, but Australian Matt Jones slipped back to 10 under after leading when the second round was belatedly completed on Saturday morning.

World number one Rory McIlroy said he was "realistically" out of the running despite a 68 that took him to six under, and Tiger Woods missed the cut at four over par.

Day makes his mark at 17 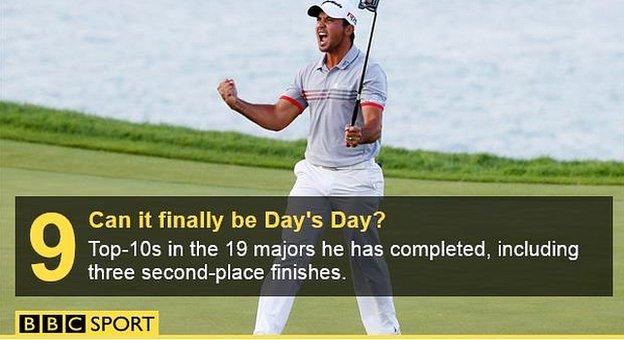 If anyone questioned how much winning a first major title would mean to Day, the Australian answered them with his reaction to making a birdie on the 17th.

The 27-year-old had looked like taking a grip on the tournament when he moved to 16 under, only to double bogey the 15th as he failed to get out of the greenside bunker at the first attempt.

With his lead gone and the chasing pack finding a flurry of birdies, Day got back on track by curling in a long putt on 17 and celebrating wildly.

"Overall I'm very pleased with the way I came back," he said. "The putter was rolling today, which was great."

Spieth in position after 'moving day'

There were birdies dropping everywhere you looked for much of the third round, but it was Spieth's charge through the back nine that might prove the most significant.

After keeping a relatively low profile with nine successive pars, a stunning run of six birdies in the last eight holes brought the 22-year-old storming into contention for another major title.

"At the beginning of the round I wasn't as aggressive and told myself, 'It's time to start taking some chances,'" said Spieth. "In order to keep up with these leaders you have to make birdies."

Rose will hope to derail the American's bid for a third major by winning his second, after seven birdies helped him to within three strokes of the lead.

"I think I was in the same position at Merion (where he won the US Open in 2013), in the second or third group, and won by two," said the Englishman. "All you're asking for is a chance on Sunday."

The world number one shot a third-round 68 to move to six under par, but said he was effectively out of contention for the title.

The Northern Irishman was four under after five holes, but a poor dropped shot at the sixth halted his momentum and four bogeys blighted his round before he finished with birdies on 16 and 18.

McIlroy, playing his first event after an ankle injury, was seven shots off the lead when he finished but ended the day nine strokes back.

"In the back of your mind, you still think you have a chance, because that's what your competitive nature tells you," said McIlroy.

"But if you're looking at it realistically, I want to go out there tomorrow and shoot the best score that I've shot this week."

"I'll be back, oh yeah," said then leader Jones as he departed the hospitality tent alongside the ninth fairway, having confirmed that his drive had indeed ended up there.

After checking the area where he would have been permitted a free drop, the Australian climbed the stairs back up among the more thirsty spectators.

Jones chose to play from the carpet rather than the fairway and, after getting the yardage from his caddie - "154 but be careful of the picket fence" - he flighted his ball to the fringe of the green.

Woods did at least make it to the weekend, although only after Friday's second round was suspended because of a storm, bringing the 14-time major winner back on Saturday morning.

The 39-year-old could not find a birdie, however, finishing on four over par to miss the cut for a third successive major, but he remained optimistic about his game.

"The confidence is growing quickly," said Woods. "That's the fun part. I'm hitting shots and able to hit shots that I haven't been able to hit in years and that's nice again.

"And to have the control that I need to have going forward, it's starting to come back, which is nice."