Australian Jason Day won his first major title with a record score of 20 under par at the US PGA Championship.

Day, 27, shot a closing 67 at Whistling Straits on Sunday to record the lowest total at one of golf's four majors.

The world number five saw off a chasing pack that included Masters and US Open champion Jordan Spieth, who finished three shots back in second place.

That was enough to ensure the American, 22, replaces Northern Irishman Rory McIlroy, 26, as world number one.

South African Branden Grace was third on 15 under and Justin Rose of England finished fourth on 14 under after his challenge faded with a double bogey on the 13th.

McIlroy closed with a 69 to end his first tournament back from an ankle injury at nine under par.

From nearly man to major champion

Day had previously recorded nine top-10 finishes in the majors, six of them in the top four, but held his nerve superbly to finally get his hands on one of golf's leading trophies.

His final score of 20 under par broke Tiger Woods's major record of 19 under at the 2000 Open Championship.

The Queenslander began the final day with a two-stroke lead and made four birdies before the first blip came at the eighth hole.

Despite the ominous presence of Spieth alongside him in the final group, Day recovered from a desperate mishit on the ninth to pick up further birdies on the 11th and 14th.

He then responded immediately to a dropped shot at 15 with his seventh birdie of the day, and played the treacherous closing two holes superbly.

"I didn't expect I was going to cry," said Day. "A lot of emotion has come out just because I've been close so many times and fallen short.

"Overall I'm just really pleased with how I played. I couldn't ask for anything better."

Spieth second, but on top of the world

Spieth might have come agonisingly close to becoming the first man to win all three American majors in the same year, but he had plenty to smile about.

With McIlroy back in 17th place, Spieth had done enough to replace the defending PGA champion at the top of the new world rankings. 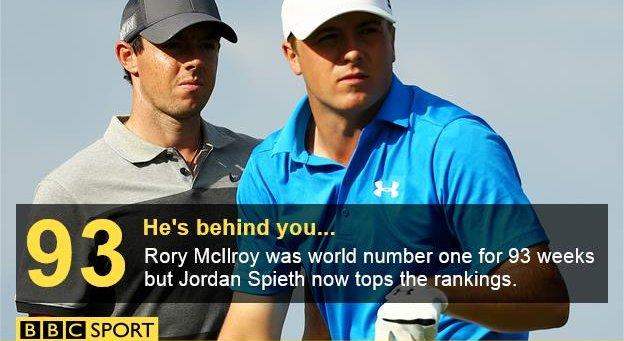 "It's as good a consolation prize as I've ever had," said Spieth, whose major finishes this year read first, first, fourth and second.

"It was not easy to dethrone Rory and it's going to be even harder to try and stay on top."

McIlroy, who had not played since the US Open in June after rupturing an ankle ligament playing football with friends, said Spieth was a worthy number one.

"Honestly, the way Jordan has been playing and the way I haven't played much this year - I think that was only my 12th or 13th event - it's very deservedly so," said McIlroy.

"I'd be the first one to congratulate him because I know the golf you have to play to get to that spot, and it has been impressive this year."

Among the many stellar names looking to reel in Day, it was unheralded world number 28 Grace who got closest when he moved with one shot after a birdie at the seventh.

Day responded to the danger with three straight birdies, however, and was never again fewer than two shots in front.

Dustin Johnson had hopes of challenging from six shots back at the start of the day, but a horrendous quadruple bogey at the first heralded a bizarre round that saw him drop four shots in the first six holes, and then make five birdies and an eagle in the next eight.

It all added up to a round of 69, a share of seventh place and another major letdown for the world number eight.

Rose looked to be moving into serious contention after four birdies took him to 16 under par by the 11th, only for a double bogey on 13 to effectively end his challenge.

German Martin Kaymer fell away with a double bogey on the sixth, while the likes of Anirban Lahiri of India, South African George Coetzee and Americans Brooks Koepka and Matt Kuchar were too far behind to worry Day, despite fine rounds.